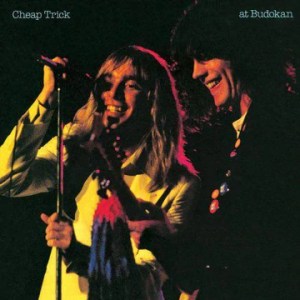 The first pressings of this record come with an OBI strip and a Japanese style lyric and photo booklet, giving the impression that this is a Japanese pressing. But it’s clearly domestic, so kudos have to go to Epic Records for doing a wonderful imitation that would practically fool any record collector.

Most of the copies we have to offer will come with the booklet, while the OBI strips are long gone.

This is probably the only Cheap Trick record most casual fans will ever need. The live versions of ‘Ain’t That A Shame’ and ‘I Want You To Want Me’ are AS GOOD AS IT GETS. Where would Classic Rock Radio be without catchy pop like this? Nowhere man!

What the best sides of this Live Classic Rock Album have to offer is not hard to hear:

What We’re Listening For on Dream Police

Hello There
Come on, Come On
Lookout
Big Eyes
Need Your Love

While their records were entertaining and full of skillful pop, it wasn’t until At Budokan that Cheap Trick’s vision truly gelled.

Many of these songs, like “I Want You to Want Me” and “Big Eyes,” were pleasant in their original form, but seemed more like sketches compared to the roaring versions on this album. With their ear-shatteringly loud guitars and sweet melodies, Cheap Trick unwittingly paved the way for much of the hard rock of the next decade, as well as a surprising amount of alternative rock of the 1990s, and it was At Budokan that captured the band in all of its power.