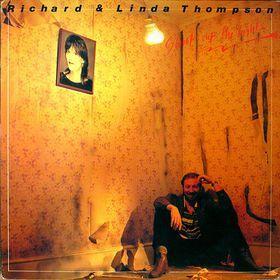 Without a doubt, this is the best record Richard and Linda Thompson ever made together, possibly the best record Thompson was ever involved with, but it also holds one other important distinction, one of great interest to us audiophiles: it’s the BEST SOUNDING record he (they) ever made as well.

This vintage Hannibal pressing has the kind of Tubey Magical Midrange that modern records rarely even BEGIN to reproduce. Folks, that sound is gone and it sure isn’t showing signs of coming back. If you love hearing INTO a recording, actually being able to “see” the performers, and feeling as if you are sitting in the studio with the band, this is the record for you. It’s what vintage all analog recordings are known for — this sound.

As I was playing the finalists for side two (at ear-splitting levels I might add) a strange thought crossed my mind. Where had I heard this kind of monstrous, punchy bass and these soaring, perfectly distorted guitars, so big and so powerful, before? There was something about the sound – the awesome energy, the freedom from compression or spatial restraint of any kind – that was somehow familiar from another shootout.

After a minute’s deliberation, the answer came to me: I was remembering the feeling I got from the White Hot Stamper of Led Zeppelin II we played not long ago.

Yes, that’s the album that it most closely resembles. As outlandish as it may sound, the rock power of Shoot Out the Lights has much more in common with the rock power of Zep II than any other record I’ve heard.

But I sure have. Heard quite a few in fact. If anyone knows that sound, I do. I’ve dedicated the past forty years of my efforts in audio to reproducing records with the Big Rock Sound like Zep II. (There’s really none bigger in my opinion.)

What We’re Listening For on Shoot Out The Lights

The sound is so dynamic, the soundstage so HUGE, the size and weight are so good it just makes you want to turn your stereo up as loud as it will go. In that sense, it has some of the qualities of “live” music, because live music is loud.

With constant improvements to the system, Shoot Out is now so powerful a recording that we had no choice but to add it to our Top 100 list in 2014, but we would go even further than that and say that it would belong on a list of the Top Ten Best Sounding Rock Records of All Time. The guitars are HUGE — they positively leap out of the speakers on the title cut, freeing themselves from a studio that seems to already be the size of a house.

For those of you who are not familiar with the album, not only is it Richard and Linda Thompson’s masterpiece, something the critics recognized at the time I’m happy to report, but it was, in fact, the Rolling Stone Album of the Year for 1982 (tied with Nebraska). It ranked #333 on Rolling Stone’s list of the 500 greatest of all time, and it belongs in your collection.

A Must Own British Folk Rock Record

We consider this album the Richard and Linda Thompson’s Masterpiece.

Shoot Out The Lights found them rallying their strengths to the bitter end; it’s often been cited as Richard Thompson’s greatest work, and it’s difficult for anyone who has heard his body of work to argue the point.

Even in the best days of our marriage, Richard and I didn’t communicate with each other fabulously well,” says Linda Thompson. “I think that the reason the music was good was that we tended to save it for work.” Perhaps that explains why Shoot Out the Lights is both the best and last album Richard and Linda Thompson made together.

For a change of pace, the Thompsons had decided to record an album with producer Gerry Rafferty, who as an artist had scored a hit with “Baker Street.” But Rafferty’s slick, elaborate style was at odds with the straightforward way the Thompsons usually recorded, and the kindest thing Richard can say today about the abortive Rafferty record is “I don’t think it was wholly successful.” Linda, who still has the master tapes in her attic, is more explicit: “Richard hated it.”

Enter Richard’s friend, producer Joe Boyd, who brought the Thompsons into the studio to cut a quick, low-budget album for his small independent label, Hannibal Records. Richard found himself in more familiar surroundings — he and Boyd had worked together twelve years before, when Richard was the lead guitarist with the pioneering folk-rock group Fairport Convention. Recording was done at Olympic Studios, an old Fairport haunt, with a band that included the Fairport rhythm section of drummer Dave Mattacks, bassist Dave Pegg and guitarist Simon Nicol. Three days into the sessions they had the basic tracks for Shoot Out the Lights.

The record turned out to be the soundtrack to what Boyd calls “an elaborate soap opera.” Richard’s lyrics are crystal-clear portraits of dissolving relationships, cast with wronged or dissatisfied lovers on the one hand and riveting tales of death and violence on the other. There’s no concealing the genuine desperation of “Man in Need,” in which a man walks out on his family at dawn. Shortly after the record was completed, Richard left Linda, who was pregnant at the time, for another woman.

Richard dismisses the idea that the lyrics presaged what was to happen to their ten-year-old marriage. “The theorists can theorize,” he says, “and they may be right, but from a practical point of view, for myself, it was just the stuff I was writing, and it didn’t bear any relationship to life as I could see it at the time.”

“Do you buy that?” is Linda’s disbelieving response. “There was a cohesion to all those songs that was part of what was going on at the time,” she says. “We gravitated to that kind of subject matter. There was a kind of common denominator in those songs — they fit together, and we weeded them out that way.”

According to Linda, that common denominator was “utter misery. It was kind of a subliminal thing, but that was definitely it,” she says. “I think we both were miserable and didn’t quite know how to get it out — I think that’s why the album is so good. We couldn’t talk to each other, so we just did it on the record.”

The tension took its toll on Linda’s voice. A victim of “studio fever,” she developed a nervous tic that made her lose breath, making it difficult for her to keep her voice at full strength for more than a couple of lines at a time. As a result, Boyd was forced to painstakingly stitch together complete vocals from several takes. But for all the studio trickery, the performances have a real cohesion and showcase Linda’s achingly beautiful voice.

The poignancy of English folk music is evident in songs like Linda’s heartbreaking “Walking on a Wire” and Richard’s caustic “Back Street Slide.” The latter, the album’s hardest rocker, modifies an Anglo-Irish folk melody with an odd-metered, almost Zeppelinesque riff pinched from a tune the guitarist had heard on Algerian radio.

The album’s masterpiece, though, is its title track. A slow, dissonant rocker about a psychotic killer, it was, according to Richard, originally about the Russians in Afghanistan. “Somehow it developed into this urban melodrama,” he says. “I can’t understand how that happened.”

On Shoot Out the Lights, Richard reclaimed what he calls his “license to rip” and came up with his most inspired and unrestrained guitar playing since the glory days of Fairport Convention. Nowhere is Richard’s renaissance more apparent than on the masterful second solo of “Shoot Out the Lights”: alternately soaring and twitching, Thompson’s guitar echoes a psychopath’s flitting emotions, ending on a tantalizingly unresolved note.

The song nearly didn’t make it onto the record. If Richard had had his way, the light pop tune “Living in Luxury” would have been there instead. “It’s Richard at his most frivolous,” Boyd says of “Living in Luxury.” The song was left off the record. (It now appears as a bonus track on the Shoot Out the Lights CD.)

At the end of each side is respite — a calm in the eye of the storm. The gentle ballad “Just the Motion” “was an attempt, deliberate or unconscious, to write something that was a bit restful,” says Richard. To close the record, the Thompsons duet on the perversely joyous “Wall of Death,” ostensibly about an amusement-park ride. “You can waste your time on the other rides.” they sing, “but this is the nearest to being alive.”

The ensuing tour was understandably tense and marked by screaming matches both on and off the stage. “I felt like I really sang great for the first time in years on that tour,” says Linda. “It was a release, literally and figuratively.”

Despite the string of excellent records that preceded it, Shoot Out the Lights remains the Thompsons’ most commercially successful effort, even though it never made the pop charts. With more than a trace of bitterness, Richard acknowledges that part of its appeal is the couple’s split. “I think it may have helped sales,” he says. “It’s a great promotional ploy — I recommend it.”