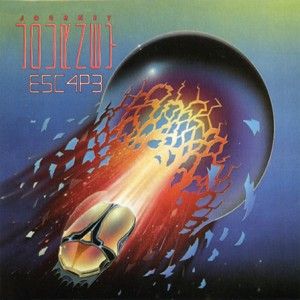 We’ve been trying to find good sound on Journey records for close to a decade, and finally we have something to show for all that work — killer sound on their only Number One album, with monster jams like Don’t Stop Believin’, Stone in Love, Who’s Crying Now — the first three tracks on side one! — and the big closer for side two, Open Arms.

Most greatest hits albums don’t have this many classic rockers. Not sure how we’ll fare with the rest of their catalog, but this one is a good place to start if you’re a fan of the band.

The vocals on Who’s Crying Now are sweet and breathy like no copy you’ve heard. Texture without grit — now that’s hard to do on a Journey album. (Or Queen, see below.) 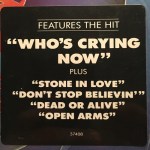 The producer and engineer for Escape is none other than Mike Stone. This was his first album with Journey after engineering all of Queen’s albums from the first through News of the World. If you hear some Queen in the music and sound of Escape it’s safe to say it’s not entirely accidental.

Nice to have your first album for the band go to Number One. The reverse is true for the former Santana-man Greg Rollie. As soon as he left the band, they hit it big. Their next three albums were all Top Five as well.

What We’re Listening For on Escape

Escape flung Journey steadfastly into the AOR arena, combining Neal Schon’s grand yet palatable guitar playing with Jonathan Cain’s blatant keyboards. All this was topped off by the passionate, wide-ranged vocals of Steve Perry, who is the true lifeblood of this album, and this band.

The songs on Escape are more rock-flavored, with more hooks and a harder cadence compared to their former sound. “Who’s Crying Now” spotlights the sweeping fervor of Perry’s voice, whose theme about the ups and downs of a relationship was plentiful in Journey’s repertoire. With “Don’t Stop Believing,” the whisper of Perry’s ardor is crept up to with Schon’s searing electric guitar work, making for a perfect rock song. One of rock’s most beautiful ballads, “Open Arms,” gleams with an honesty and feel only Steve Perry could muster.

Outside of the singles, there is a certain electricity that circulates through the rest of the album. The songs are timeless, and as a whole, they have a way of rekindling the innocence of youthful romance and the rebelliousness of growing up, built from heartfelt songwriting and sturdy musicianship.