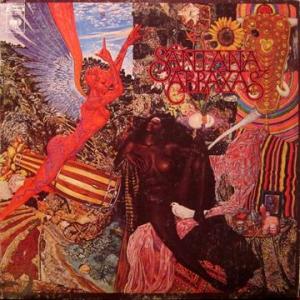 This copy is smooth, sweet, rich, full-bodied, and SUPER dynamic. The vocals are shockingly present and clear, with breath and body like nothing you have ever heard. Just listen to all that room around the drums!

The sound is transparent, open, and spacious, with life and rhythmic energy to spare. The bass is deep, tight, and note-like, exactly what this music needs to REALLY ROCK!

Both sides have an exceptionally big soundfield, which opens up and allows you to appreciate all of the players’ contributions. That’s a BIG deal for this music. For me, a big speaker guy with a penchant for giving the old volume knob an extra click or two, it just doesn’t get any better than Abraxas.

You may have heard me say this before, but it’s important to make something clear about this music. It doesn’t even make sense at moderate listening levels. Normal listening levels suck the life right out of it. You can tell by the way it was recorded — this music is designed to be played back at LOUD levels, and anything less does a disservice to the musicians, not to mention the listener, you.

What We’re Listening For on Abraxas

Like Santana’s first album, when you play a Hot Stamper copy of Abraxas very loud, you soon find yourself marveling at the musicianship of the group — because the best Hot Stamper pressings, communicating every bit of the energy and clarity the recording has to offer, let you hear what a great band they were.

Folks, you owe it to yourself to hear what a great band Santana was back in the day. Hot Stampers of any of the first three records will do the trick. If you’ve got the stereo that can play live rock and roll, we’ve got the records that sound like Santana playing live.

Take it from someone who likes to listen to his music at fairly loud levels, it is truly a thrill.

The San Francisco Bay Area rock scene of the late ’60s was one that encouraged radical experimentation and discouraged the type of mindless conformity that’s often plagued corporate rock. When one considers just how different Santana, Jefferson Airplane, Moby Grape, and the Grateful Dead sounded, it becomes obvious just how much it was encouraged.

In the mid-’90s, an album as eclectic as Abraxas would be considered a marketing exec’s worst nightmare. But at the dawn of the 1970s, this unorthodox mix of rock, jazz, salsa, and blues proved quite successful.