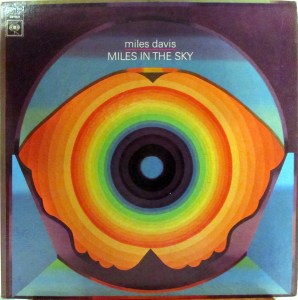 We just finished a big shootout for this superb Miles Davis album and this copy was dramatically better sounding than many. Both sides have excellent bass, correct sounding brass, wonderful transparency and loads of Tubey Magic.

Many copies didn’t have the kind of transparency or openness that we heard here, which made it harder to appreciate the contributions of the different players. This one puts plenty of separation between the various instruments, so you can make sense of what each of these heavy-hitters adds to the mix. You will have a very hard time finding a copy out in the bins that sounds as good as this one!

What We’re Listening For on Miles In The Sky

This vintage Columbia pressing has the kind of Tubey Magical Midrange that modern records cannot begin to reproduce. Folks, that sound is gone and it sure isn’t showing any sign of coming back.

Having done this for so long, we understand and appreciate that rich, full, solid, Tubey Magical sound is key to the presentation of this music. We rate these qualities higher than others we might be listening for (e.g., bass definition, soundstage, depth, etc.). The music is not so much about the details in the recording, but rather in trying to recreate a solid, palpable, real Miles Davis and his quintet playing live in your listening room. The best copies have an uncanny way of doing just that.

With the 1968 album Miles in the Sky, Miles Davis explicitly pushed his second great quintet away from conventional jazz, pushing them toward the jazz-rock hybrid that would later become known as fusion. Here, the music is still in its formative stages, and it’s a little more earth-bound than you might expect, especially following on the heels of the shape-shifting, elusive Nefertiti.

On Miles in the Sky, much of the rhythms are straightforward, picking up on the direct 4/4 beats of rock, and these are illuminated by Herbie Hancock’s electric piano — one of the very first sounds on the record, as a matter of fact — and the guest appearance of guitarist George Benson on “Paraphernalia.” All of these additions are tangible and identifiable, and they do result in intriguing music, but the form of the music itself is surprisingly direct, playing as extended grooves.