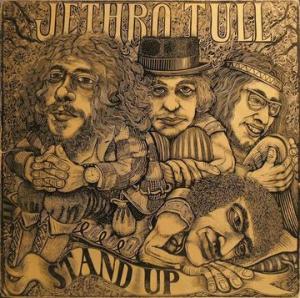 Need a refresher course in Tubey Magic after playing too many modern recordings or remasterings? These Island pressings are overflowing with it. Rich, smooth, sweet, full of ambience, dead-on correct tonality — everything that we listen for in a great record is here. We must give thanks to the brilliant engineer Andy Johns.

Shooting Out Stand Up

What was surprising about the shootouts we had done in past years was how disappointing most of the early British pressings we played were. They were flat, lacked energy and just didn’t rock the way they should have.

We learned the hard way that most British Pink label pressings aren’t especially rich, that some are small and recessed, and some are just so smeary, thick and opaque that they frustrate the hell out of you as you’re trying to hear what any of the musicians other than Ian Anderson is doing.

The copies that lack extreme highs are often dull and thick, and usually have smeary, blurry sound. When you can’t hear into the recording, the music itself becomes boring.

If forced to choose, I would take a copy that’s a little dull on top as long as it still had a meaty, powerful, full-bodied sound over something that’s thin and leaned out. There are many audiophiles who can put up with that sound — I might go so far as to say the vast majority can — but I am not one of them.

What to Listen For on Stand Up

Clearer, sweeter sound with less of the veiling and congestion that plagues most British pressings.

More bass and tighter bass. This is fundamentally a rock record. It needs weight down low to rock the way Andy Johns wanted it to.

Of course one of the key elements to any Jethro Tull record is the quality of the flute. You want it to be airy and breathy — like a real flute — and some copies will give you that, but keep in mind there are always trade-offs at work on old rock records like this. It’s a full-bodied, rich sounding recording with the volume up good and high. Make sure your system is playing it that way before you start to focus on the flute, otherwise you are very likely to be led astray.

We consider this album a Masterpiece of British Blues Rock. It’s a recording that belongs in any serious Rock Music Collection.

No, Jethro Tull is not just another English blues band. This Was, their first album, made some gestures in that direction, obligatory, in a way, for the time (summer of ’68); in its differences it was intriguing even as it disappointed. Its inadequacies were unconventional; the essential problem seemed to be a style in search of a subject.

Bob Dylan once said that the English know how to pronounce “marvelous” better than Americans, but that they have a little trouble with “raunchy.” Stand Up!, Jethro Tull’s new album, has a fairly low raunch quotient, true to form, but it is quite marvelous.

For one thing, the band’s orientation is more definite than before. With the removal of Rick Abrahams to form Blodwyn Pig, the musical tug-of-war which could be heard on the first album has here been effectively curtailed. Ian Anderson simply dominates the proceedings — doing all the writing and singing, and playing a potpourri of instruments. He reveals a melodic gift on this album not apparent on the earlier one, a fuller awareness of the coloristic possibilities of the flute, and a catholicity of taste.

Stand Up! has great textural interest, due, in part, to a more sophisticated recording technique, in part to the organ, mandolin, balalaika, etc., which Anderson plays to enrich each song. The band is able to work with different musical styles, but without a trace of the facile, glib manipulation which strains for attention.

I can hear ethnic influences throughout the album — a hint of Greek rhythms on the flute break of “We Used to Know” and in the body of “Four Thousand Mothers” — but they are too well assimilated to be easily pinpointed.

“Bourree” has that unmistakable baroque swing, a suggestion of the traditional English round, some jazz interludes, and a straight-forward yet breathtaking bass solo before, it winds its way to completion.

“Jeffrey Goes to Leicester Square” has a sense of the vague, charming disorganization of medieval music. “Look into the Sun,” which finishes side one, is in its melodic twists and turns, a song of genuine poignance, with Martin Barre’s guitar playing a model of lyricism and understatement.

On the second side, “We Used to Know” employs what could be called a fade-in, beginning softly and then building in volume, with Barre wah-wahing madly by the end. Only “Reasons for Waiting” is slightly marred, there being a superfluous string section.

As I’ve said, the album is not really funky; rather, it is a meticulously crafted work (no sterility implied) which deserves careful listening. At a time when many of the established stars are faltering, it is a particular pleasure to hear an important new voice.