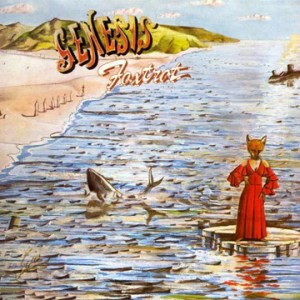 What We’re Listening For on Foxtrot

Horizons
Supper’s Ready
i. Lover’s Leap
ii. The Guaranteed Eternal Sanctuary Man
iii. Ikhnaton and Itsacon and Their Band of Merry Men
iv. How Dare I Be So Beautiful
v. Willow Farm
vi. Apocalypse in 9/8 (Co-Starring the Delicious Talents of Gabble Ratchet)
vii. As Sure As Eggs Is Eggs (Aching Men’s Feet)

Foxtrot is where Genesis began to pull all of its varied inspirations into a cohesive sound — which doesn’t necessarily mean that the album is streamlined, for this is a group that always was grandiose even when they were cohesive, or even when they rocked, which they truly do for the first time here.

Indeed, the startling thing about the opening “Watcher of the Skies” is that it’s the first time that Genesis attacked like a rock band, playing with a visceral power. There’s might and majesty here, and it, along with “Get ‘Em Out by Friday,” is the truest sign that Genesis has grown muscle without abandoning the whimsy.

Certainly, they’ve rarely sounded as fantastical or odd as they do on the epic 22-minute closer “Supper’s Ready,” a nearly side-long suite that remains one of the group’s signature moments. It ebbs, flows, teases, and taunts, see-sawing between coiled instrumental attacks and delicate pastoral fairy tales. If Peter Gabriel remained a rather inscrutable lyricist, his gift for imagery is abundant, as there are passages throughout the album that are hauntingly evocative in their precious prose.

But what impresses most about Foxtrot is how that precociousness is delivered with pure musical force. This is the rare art-rock album that excels at both the art and the rock, and it’s a pinnacle of the genre (and decade) because of it.

This is Genesis’ fourth album, their second for Charisma, and the second as a mature band. The tracks (I omit the word “songs” purposely) on Foxtrot seem more accessible, more defined, than on their last album, Nursery Cryme.

The opener, “Watcher In The Skies,” is a beautifully constructed sci-fi tale presented against glittering sheets of cascading sound, running in torrents like a burst dam, across the aural spectrum; it rolls and boils and flows like thick velvet of varying colors.

By contrast, “Time Table,” is simplicity itself — Tony Banks’ medieval piano behind Peter Gabriel’s voice spinning its web of wonder.

But it’s “Get ‘Em Out By Friday” that is the real gem of the album (even though Side Two holds a marvelous seven part suite). It is, in fact, an execution, a mini-opera with six characters represented. On the surface, the struggle concerns Styx Enterprises (represented by Mr. John Pebble and Mr. Mark Hall) who have just bought an apartment building, and Mrs. Barrow (a tenant) who’s threatened with eviction. But this is the year 2012, and Genetic Control has put a “four foot restriction on humanoid height.” And why, pray tell? Becuase G.C. had the foresight to buy up housing property and now can get double the number of tenants in each building. The track ends with the reading of a memo from Satin Peter of Rock Developments Ltd.: “With land in your hand you’ll be happy on earth/Then invest in the Church for your heaven.”

All this presented unceremoniously, unpretensiously and with the utmost professionalism. Throughout, there are acres of marvelous solos. But Genesis really transcends such banal and pedestrian inventions as categories.

This is, needless to say, an important album to listen to. Maybe you’ll dig it, maybe you won’t, but this is the kind of band (especially now) that we need to support. And the word is that they’re even better live. I’ve gotta see. And I will.