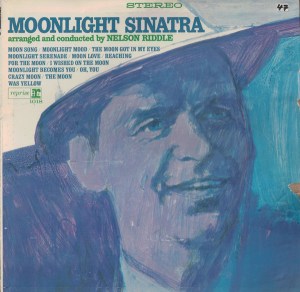 The presence and immediacy here are wonderful. Turn it up and Frank is between your speakers, putting on the performance of a lifetime. On the best, hard-to-find copies, the sound is big, open, rich and full. The highs are extended and silky sweet. The bass is tight and punchy.

This Blue Green Label LP also has the midrange magic that’s missing from the later reissues. As good as some of them can be, this one is more real sounding. It gives you the sense that Frank Sinatra is right in front of you.

He’s no longer a recording — he’s a living, breathing person. We call that “the breath of life,” and the best pressings have it in spades. His voice is so rich, sweet, and free of any artificiality, you immediately find yourself lost in the music because there’s no “sound” to distract you.

What the best sides of Moonlight Sinatra have to offer is not hard to hear:

And we know a fair bit about the man’s recordings at this point. As of today, we’ve done commentaries for more than 21 different Sinatra shootouts, and that’s not counting at least another ten titles that either bombed or were sold off years ago.

What We’re Listening For on Moonlight Sinatra

Credit engineer Lowell Frank for correctly capturing the sound of every instrument here: the guitars, piano, strings, drums, percussion instruments — everything has the natural timbre of the real thing.

One of the best sounding Frank Sinatra records is his as well: September Of My Years, from 1965, also on Reprise and only good on the original label and only good in stereo, like this title. There must be plenty of Tubey Magic on the tapes. It’s key to the best pressings. Without it, you might as well be playing a CD.

And let’s not forget the amazing (when you find a good one) Sinatra At The Sands, a record that blew my mind the first time I heard it back in the early ’70s.

Oh, You Crazy Moon
The Moon Got In My Eyes
Moonlight Mood
Moon Love
The Moon Was Yellow (And The Night Was Young)

Driven by a set of lush, sparkling Nelson Riddle arrangements, Moonlight Sinatra is a low-key, charming collection. Although the basic concept is somewhat nebulous — all of the songs have the word “moon” in the title — Riddle wrote a series of charts that suggest a warm, lovely evening with a variety of tones and moods, from light Latin rhythms to sweet ballads… An enjoyable, romantic listen. 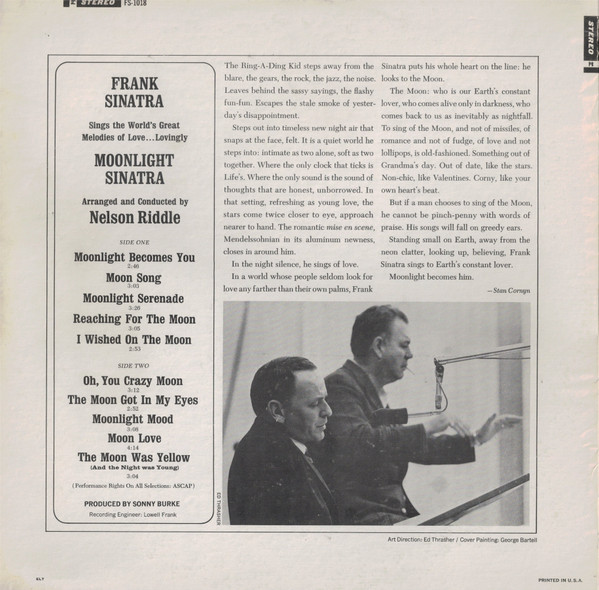