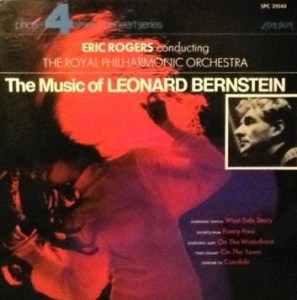 Side two is where the some of the best orchestral action can be found, and it is presented here with SPECTACULAR AUDIO FIDELITY the likes of which you may have never experienced.

THE All Time Sleeper

This record is a real sleeper, for which I am much indebted to Robert Pincus, the man who first brought it to my attention more than a decade ago. It contains the music of Leonard Bernstein, conducted by Eric Rogers, played with extraordinary skill by the Royal Phil. Rogers, to these ears anyway, seem to understand Bernstein as well or better than Bernstein himself. I certainly don’t know a better recording of the selections of Bernstein’s music compiled here.

Rogers really breathes FIRE into these pieces, especially on side two. We have never heard anything like it, and we play a lot of records!

What We’re Listening For on The Music of Leonard Bernstein

Those of you with a recording of Glinka’s Russla and Ludmilla Overture will no doubt notice the surprising similarities between it and Lenny’s Overture to Candide found here. I wouldn’t want to call it a ‘steal’; let’s just say he borrowed liberally from that work.

This Bernstein Album Is a Monster

The Music of Leonard Bernstein ranks right up at the top of our Difficulty of Reproduction Scale. Do not attempt to play it using anything but than the highest quality equipment.

Unless your system is firing on all cylinders, even our hottest Hot Stamper copies — the Super Hot and White Hot pressings with the biggest, most dynamic, clearest, and least distorted sound — can have problems .

This is a record that’s going to demand a lot from the audio enthusiast, and we want to make sure that you feel you’re up to the challenge. If you don’t mind putting in a little hard work, here’s a record that will reward your time and effort many times over, and probably teach you a thing or two about tweaking your gear in the process (especially your VTA adjustment, just to pick an obvious area most audiophiles neglect).

Overture to “Candide”
‘Times Square, 1944’ from “On the Town”
Symphonic Suite from the film “On the Waterfront”
Excerpts from “Fancy Free”

Symphonic Dances from “West Side Story”

The musical works well partly because of its potent combination of violent, energetic music, often powered by vibrant rhythms, with more reflective and indeed thoroughly romantic material. There are also elements of Latin American music. But two other qualities mark out this amazing score. First, there’s the brilliant orchestration. Actually that for the Suite is not by Bernstein at all but by two master orchestrators, Irwin Kostal and Sid Ramin, whom he appointed to do the job of converting music composed for a pit-sized band to music designed for a huge symphony orchestra. And there are all those memorable melodies. This is a musical, and like all the best musicals it sends the listener away with the tunes buzzing in the head.

Leonard Bernstein (August 25, 1918 – October 14, 1990) was an American composer, conductor, author, music lecturer and pianist. He was among the first conductors born and educated in the United States of America to receive worldwide acclaim. According to The New York Times, he was “one of the most prodigiously talented and successful musicians in American history.”

His fame derived from his long tenure as the music director of the New York Philharmonic, from his conducting of concerts with most of the world’s leading orchestras, and from his music for West Side Story, as well as Candide, Wonderful Town, On the Town and his own Mass.

Bernstein was also the first conductor to give numerous television lectures on classical music, starting in 1954 and continuing until his death. In addition, he was a skilled pianist, often conducting piano concertos from the keyboard.

As a composer he wrote in many styles encompassing symphonic and orchestral music, ballet, film and theatre music, choral works, opera, chamber music and pieces for the piano. Many of his works are regularly performed around the world, although none has matched the tremendous popular and commercial success of West Side Story.