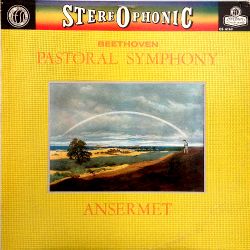 The texture on the strings is captured perfectly; this is, by the way, an area in which modern pressings fail almost completely. We have discussed this subject extensively on the site. The “rosin on the horsehair” is a sound that is apparently impossible to encode on modern vinyl.

The best pressings from the Readers Digest set with Leibowitz conducting were very good but no match for Ansermet and the legendary Orchestre De La Suisse Romande and the lovely Victoria Hall in which they recorded.

We have liked Monteux on RCA for the 6th in the past. We do not believe the best pressings are competitive with this London.

The ’60s Decca/London cycle with Schmidt-Isserstedt and the Vienna Phil has always sounded flat and modern to us on every pressing we’ve played.

James Walker was the producer, Roy Wallace the engineer for these sessions from October of 1959 in Geneva’s glorious Victoria Hall. Released in 1960, it’s yet another remarkable disc from the Golden Age of Vacuum Tube Recording.

The hall the Suisse Romande recorded in was possibly the best recording venue of its day, perhaps of all time. More amazing sounding recordings were made there than in any other hall we know of. There is a solidity and richness to the sound that goes beyond all the other recordings we have played, yet clarity and transparency are not sacrificed in the least.

It’s as wide, deep and three-dimensional as any, which is, of course, all to the good, but what makes the sound of these recordings so special is the weight and power of the brass, combined with the timbral accuracy of the instruments in every section.

What We’re Listening For on Beethoven’s Sixth

Beethoven was a lover of nature who spent a great deal of his time on walks in the country. He frequently left Vienna to work in rural locales.

The first sketches of the Pastoral Symphony appeared in 1802. It was composed simultaneously with Beethoven’s more famous—and more fiery—Fifth Symphony. Both symphonies were premiered in a long and under-rehearsed concert in the Theater an der Wien in Vienna, on 22 December 1808. The work has become one of the central works of the symphonic repertoire. It is frequently performed, and has been often recorded.

The composer said, the Sixth Symphony is “more the expression of feeling than painting”, a point underlined by the title of the first movement (“Awakening of cheerful feelings…”).

The symphony begins with a placid and cheerful movement depicting the composer’s feelings as he arrives in the country. The work is in sonata form, and its motifs are extensively developed. At several points Beethoven builds up orchestral texture by multiple repetitions of very short motifs. Yvonne Frindle commented, “the infinite repetition of pattern in nature [is] conveyed through rhythmic cells, its immensity through sustained pure harmonies.”

This movement, titled by Beethoven “By the brook,” is held to be one of Beethoven’s most beautiful and serene compositions. It is in a 12/8 meter and the key is B flat major, the subdominant of the main key of the work, and is in sonata form.

At the opening the strings play a motif that clearly imitates flowing water. The cello section is divided, with just two players playing the flowing-water notes on muted instruments, with the remaining cellos playing mostly pizzicato notes together with the double basses.

Toward the end of the movement, in the coda that begins at measure 124, there is a cadenza for three woodwind instruments that imitates bird calls at measure 130. Beethoven helpfully identified the bird species in the score: nightingale (flute), quail (oboe), and cuckoo (clarinet).

This is a scherzo, which depicts country folk dancing and reveling. It is in F major, returning to the main key of the symphony.

The form of the movement is an altered version of the usual form for scherzi, in that the trio appears twice rather than just once, and the third appearance of the scherzo theme is truncated. Perhaps to accommodate this rather spacious arrangement, Beethoven did not mark the usual internal repeats of the scherzo and the trio. Theodor Adorno identifies this scherzo as the model for the scherzos by Anton Bruckner.

At one point in the movement Beethoven uses a melody that sounds vaguely like a quotation from the folk song “Zu Lauterbach”.

The final return of Scherzo conveys a riotous atmosphere with a faster tempo. The movement ends abruptly, leading without a pause into the fourth movement.

The fourth movement, in F minor, depicts a violent thunderstorm with painstaking realism, building from just a few drops of rain to a great climax with thunder, lightning, high winds, and sheets of rain. The storm eventually passes, with an occasional peal of thunder still heard in the distance. There is a seamless transition into the final movement.

This movement parallels Mozart’s procedure in his String Quintet in G minor K. 516 of (1787), which likewise prefaces a serene final movement with a long, emotionally stormy introduction.

The finale is in F major and is in 6/8 time. The movement is written in sonata rondo form, meaning that the main theme appears in the tonic key at the beginning of the development as well as the exposition and the recapitulation. Like many classical finales, this movement emphasizes a symmetrical eight-bar theme, in this case representing the shepherds’ song of thanksgiving. The mood throughout is unmistakably joyful.

The coda, which Antony Hopkins has called “arguably the finest music of the whole symphony,” starts quietly and gradually builds to an ecstatic culmination for the full orchestra (minus “storm instruments”), with the first violins playing very rapid triplet tremolo at the top of their range. There follows a fervent passage suggestive of prayer, marked by Beethoven “pianissimo, sotto voce”; most conductors slow the tempo for this passage. After a brief period of afterglow, the work ends with two emphatic F major chords.