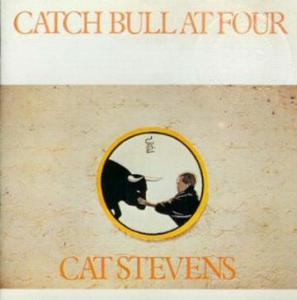 If you’re familiar with what the best Hot Stamper pressings of Tea for the Tillerman, Teaser and the Firecat or Mona Bone Jakon can sound like — amazing is the word that comes to mind — then you should easily be able to imagine how good the best copies of Catch Bull at Four sounds.

All the ingredients for a Classic Cat Stevens album were in place for this release, which came out in 1972, about a year after Teaser and the Firecat. His brilliant guitar player Alun Davies is still in the band, and Paul Samwell-Smith is still producing as brilliantly as ever. Silent Sunlight sounds UNREAL — silky, warm, and delicate.

There’s no shortage of deep, well-defined bass either, allowing the more dynamic songs to really come alive. Can’t Keep It In rocks on this pressing. There are plenty of other very dynamic tracks as well. The ones that get loud without becoming hard or harsh are the ones that tend to get everything else right at the lower volumes. Freezing Steel really ROCKS on this copy, with super low distortion and virtually no strain in the vocals.

Since then we have had many copies come in, but none that could compete with the Magic Stamper pressings. And the best part of this story is that, no, the best stampers are not 1U, or 2U, or even 3U. In other words they are far from the stampers found on the earliest pressings. That’s one reason it took us so long to discover them, because they are much less commonly found than pressings with the earlier stampers. By the time these later pressings were mastered, pressed and released, the album’s biggest selling days were over. For all we know this cutting may have been done just to keep the record in print, possibly undertaken many years after its initial release.

Who knows? Who cares? What difference does it make?

Well, it does serve to make a point near and dear to our hearts: that the idea (and operational premise of most record collectors) that the Original Is Always Better is just a load of bunk. It might be and it might not be. If you want better sounding records you had better open your mind to the idea that some reissues have the potential to sound better than even the best original pressing of the album.

Of course this is nothing but bad news for the average audiophile collector, who simply does not have the time or money to go through the hassle of buying, cleaning and playing every damn pressing he can get his hands on.

But good news for us, because we do.

What We’re Listening For on Catch Bull At Four

More Of What to Listen For

This copy has the kind of sound we look for in a top quality Cat Stevens record: immediacy in the vocals (so many copies are veiled and distant); natural tonal balance (most copies are either bright or dark; ones with the right balance are the exception, not the rule); good solid weight (so the piano and toms sound full and powerful); spaciousness (the best copies have studio ambience like you would not believe); and last but not least, TRANSPARENCY, the effect of being able to see INTO the soundfield all the way to the back, where there is plenty going on in this remarkably sophisticated studio recording.

This track often sounds a bit flat and midrangy, and it sounds that way on most domestic pressings and the “wrong” imports.

The best imports and domestic pressings are the only ones with the sweeter, tubier Midrange Magic that we’ve come to associate with the best Cat Stevens recordings.

Boy With a Moon & Star on His Head

Another very difficult track to get to sound right. The better copies have such amazingly transparent sound you can’t help feeling as though you really are in the presence of live human beings. You get the sense of actual fingers — in this case the fingers of Cat’s stalwart accompanist Alun Davies — plucking the strings of his Spanish guitar.

This is one of the best sounding tracks on the album, right up there with Cat’s most well recorded big productions such as Tuesday’s Dead, Changes IV, Where Do The Children Play and Hard Headed Woman. On Hot Stamper copies this is a Demo Track that’s hard to beat.

The midrange magic of the acoustic guitars is off the scale. Some of Catch Bull At Four has the magic and some of it does not, unlike Tea and Teaser, which are magical all the way through.

Silent Sunlight
Can’t Keep It In

On the best copies this track is as Huge and Powerful as anything the man ever recorded. It’s another one of the best sounding tracks on the album. On our top copies this is a Demo Track that’s hard to beat.

The midrange magic of the acoustic guitars is off the scale. Some of Catch Bull At Four has the magic and some of it does not, unlike Tea and Teaser, which are magical all the way through.

This track is a great test for side two. The strings should sound silky yet also have nice texture to them. Without proper mastering, the kind that results in midrange clarity and extension on the top, they’ll never sound right.

There’s also a lot going on with the percussion on this track; you’ll need a dynamic copy to really get the full effect. If you have the kind of speaker that can really move some air you are in for a treat with this one.

Another great test for side two. The huge drums and chorus at the end of the song are going to be tough to get right if you’re playing the album at the good and loud levels we do.

Again, you’ll need a dynamic copy with plenty of solid deep bass to get the full effect. If you have big speakers that can really move air this track might just rock your world.

Catch Bull is impeccably produced. Its musical contents are like those of Teaser and the Firecat—simple, short-phrased melodies and spare and vibrant arrangements. There are, however, notable differences between Catch Bull and its predecessor. The instrumental repertoire has been widened somewhat: three cuts make minimal use of a synthesizer, and on four cuts Cat plays piano.

…Happily, the greatest difference between Teaser and Catch Bull lies in the lyric themes of the songs. Though some of the lyrics retain Cat’s fanciful imagery— word poems so dreamily obscure as to defy interpretation—he shows a new emotional directness, especially on side two, the albums “down” side. This is reflected in Cat’s singing, which becomes more assured and more emotive with each album.

Celebrated and adored for his sanguine lyrics and irresistible hooks, Cat Stevens was one of the rare singer-songwriters capable of composing genuinely optimistic songs that didn’t leave a sappy residue in listeners’ ears.

However, even a cursory listen to 1972’s Catch Bull at Four proves that the Cat had seen darkness, too, and that those darker elements had become more pronounced than they’d been in the past. His vocal style shifts from the cool croon that made Tea for the Tillerman and Teaser and the Firecat top sellers to a harsher, almost growling delivery.

The album’s standouts–the wistful reverie “Sitting” and the delightfully infectious “Can’t Keep It In”–are resolute in lyric and melody. Rambling, mystical odes such as “The Boy with a Moon & Star on His Head,” “Angelsea,” and “Sweet Scarlet” offer quaintly romantic imagery and lavishly undulating melodies.

But it’s the mercurial dynamics and driving melody of “18th Avenue (Kansas City Nightmare)” and the bitter conviction of “Ruins” that give the album a backbone and a sense of balance. — Sally Weinbach