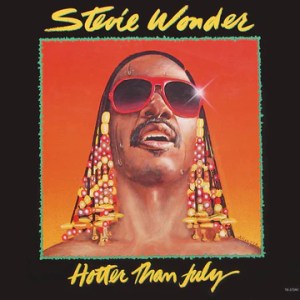 *CONDITION NOTES: On side two, the last 2-3 seconds of Track 5, Happy Birthday, are somewhat crackly.

Most copies lack the presence, energy and bottom end weight to let these funky songs work their magic, but a copy like this will let you appreciate the music without the mediocre sonics of the average pressing getting in the way.

This album was recorded right at the beginning of the digital era (1980) and most pressings won’t let you forget that. So many copies we played were just too sterile to get into — clean and clear bit lacking richness and fullness. We’re huge Stevie Wonder fans around here and we’ve fallen in love with Innervisions and Songs In The Key Of Life over and over again because of their lush, analog sound on the best pressings. It took a ton of work (and a whole lot of copies) to find a Hotter Than July that we could get excited about. I don’t think there’s a copy out there that can compete with his earlier recordings sonically but at least the Hot Stamper pressings present the music in a way that audiophiles can enjoy.

Bottom line? Digital recordings are tough, but after playing a ton of copies of this album we’ve managed to find a few that were musical and enjoyable instead of fatiguing. If you haven’t played this album in years I can understand why — the typical pressings are just too clean and too dry to demand any time on your table. At least that was our experience until the top copies such as this one had us nodding our heads and rockin’ out with these great tunes. Check out a Hot Stamper pressing to remember just what a musical magician Stevie is — you’ll be jammin’ too!

What We’re Listening For on Hotter Than July

Four years after the pinnacle of Stevie Wonder’s mid-’70s typhoon of classic albums, Hotter Than July was the proper follow-up to Songs in the Key of Life (his Journey Through the Secret Life of Plants concept record was actually a soundtrack to an obscure movie that fared miserably in theaters). It also found Wonder in a different musical climate than the one that savored his every move from 1972 to 1977.

Disco and new wave had slowly crept their way into the mainstream record-buying public, and hindered the once-ample room for socially and politically charged lyrics. However, Wonder naysayed the trends and continues to do what he did best. Solid songwriting, musicianship, and production are evident in the majority of Hotter Than July. Wonder also carries on his tradition of penning songs normally not associated with his trademark sound, from the disco-tinged “All I Do” (originally planned to be released by Tammi Terrell almost ten years previously) to the reggae-influenced smash “Master Blaster (Jammin),” which went straight to the top of the R&B charts.

Hotter Than July is the portrait of an artist who still had the Midas touch, but stood at the crossroads of an illustrious career.