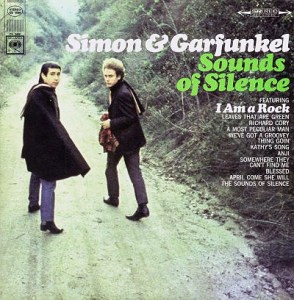 The sound is big, open, rich and full, with the performers front and center. This 360 Stereo pressing also has the MIDRANGE MAGIC that’s no doubt missing from whatever 180g reissue has been made from the 50+ year old tapes. As good as that pressing may be, we guarantee that this one is dramatically more REAL SOUNDING. It gives you the sense that Simon and Garfunkel are right in the room with you.

This 360 Stereo pressing has the kind of Tubey Magical Midrange that modern records rarely even BEGIN to reproduce. Folks, that sound is gone and it sure isn’t showing signs of coming back. If you love hearing INTO a recording, actually being able to “see” the performers, and feeling as if you are sitting in the studio with the band, this is the record for you. It’s what vintage all analog recordings are known for — this sound.

What We’re Listening For on Sounds of Silence

For the best sounding tracks try Leaves That Are Green on side one, and April Come She Will on side two. Click on the Track Listing tab above to read more about them.

But on a superb copy like this one, the track can still be surprisingly enjoyable. Not Demo Disc quality, just enjoyable.

The Sound of Silence
Leaves That Are Green

Listen to the harpsichord in the left channel and tambourine in the right. On the best copies they will sound unbelievably good. The more veiled and distorted the sound, the more obvious the need for a better copy. As our buddy JT says, that’s why we’re here.

We prefer the best stereo pressings, but some of the songs, including Richard Cory to take just one example, actually work better in Mono. Most of the Mono copies we’ve played bored us to tears, but one exceptionally good one actually showed us something. Of course it still holds true that the ultimate stereo copies are in a league of their own.

Somewhere They Can’t Find Me
Anji

Richard Cory
A Most Peculiar Man
April Come She Will

A sweetheart! The best copies bring out the intimate and breathy quality of Garfunkel’s lead. Notice the care he takes with his phrasing, precisely the kind of thing real transparency allows you to hear. Fifty-odd years ago Mercury coined the term Living Presence to describe the effect, and we’re more than happy to go with that.

We’ve Got a Groovey Thing Goin’
I Am a Rock

Rolling Stone Picks the 500 Greatest Songs of All Time

Simon wrote this as an acoustic ballad, but Simon and Garfunkel’s first single version died. While Simon was in England, Wilson, who was producing Bob Dylan’s “Like a Rolling Stone,” asked members of Dylan’s studio band to add electric guitar and drums. Columbia released the amplified “Silence,” which became a hit before Simon and Garfunkel had even heard it.