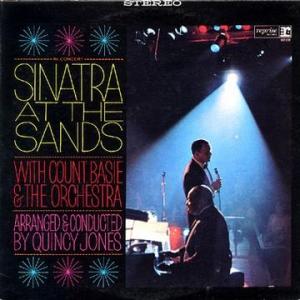 *NOTE: On side three, a mark makes 10 light ticks at the end of Track 3 and 10 moderate pops at the beginning of Track 4.

This double album presents Sinatra and Basie at the height of their powers, in a setting especially conducive to both men’s music, the big room at the Sands Hotel in Vegas. If you missed it — and I’m sure most all of us did — here’s your chance to go back in time and be seated with the beautiful people front row center. This two-disc all tube-mastered analog set is practically the only way you’ll ever be able to hear the greatest vocalist of his generation — in his prime no less — fronting one of the swingingest big bands of the time.

The sound is big, open, rich, and full. The highs are extended and silky sweet. The bass is tight and punchy. And this copy gives you more life and energy than most, by a long shot. Very few records out there offer the kind of realistic, lifelike sound you get from this pressing.

He’s no longer a recording — he’s a living, breathing person. We call that “the breath of life,” and this record has it in spades. His voice is so rich, sweet, and free of any artificiality, you immediately find yourself lost in the music because there’s no “sound” to distract you.

Also, richness is very important. We look for a combination of rich, Tubey Magical sound that still maintains a fair amount of space, clarity, transparency, and freedom from smear.

The pressings with the orange two-tone labels tend to be thinner and clearer. A high percentage of them are way too modern, bright, and gritty, and we throw them right in the trade-in pile.

Finding the copy with “best of both worlds” sound is the trick. Pressings on both labels have won shootouts in the past. With this album, we do what we always do. We play the record without looking at the label and simply grade the quality of the sound coming out of the speakers. Any other approach is liable to fall prey to unconscious biases. As we like to say, record shootouts may not be rocket science, but they’re a science of a kind, one with strict protocols developed over the course of many years to ensure that the results we arrive at are as accurate as we can possibly make them.

I was at my local stereo store listening to speakers one day, and the salesman commented that the speakers we were listening to (the old Infinity Monitors with the Walsh tweeter) sounded “boxy”. I confessed to him that I didn’t actually know what that meant or what it would sound like if it weren’t boxy.

A Must Own Sinatra Album