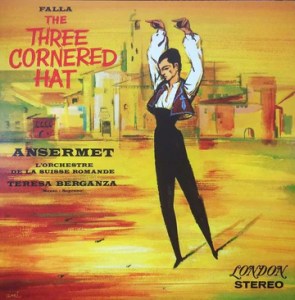 This is High Fidelity Audiophile Gold, with bells, drums, voices, trumpets, strings, woodwinds and more, all sounding so real it will take your breath away. The Golden Age tapes have clearly been mastered brilliantly onto this vintage London vinyl.

No doubt you have run into something like this in our classical listings:

This London is energetic, dynamic, spacious, transparent, rich and sweet. James Walker was the producer, Roy Wallace the engineer for these sessions from 1961 in Geneva’s glorious Victoria Hall. It’s yet another remarkable disc from the Golden Age of Vacuum Tube Recording.

We were impressed with the fact that this pressing excelled in so many areas of reproduction. The illusion of disappearing speakers is one of the more attractive aspects of the sound here, allowing the listener to inhabit the space of the concert hall in an especially engrossing way.

For those of you who are not familiar with the work, it starts out with multiple castanets and a group of men shouting, all of which sounds amazing here.

All that commotion is followed by a woman singing from the back of the stage. She is obviously being picked up by the microphone at the front of the stage, so the huge amount of depth that creates in the recording is really quite remarkable.

When the brass comes in it sounds very natural, very tonally correct. Same with the strings. One thing these good Londons have going for them is dead on tonality. For those of us who prize that quality in a recording, it allows us to appreciate these wonderful performances all the more.

What the best sides of The Three Cornered Hat have to offer is not hard to hear:

An Orchestra with Singers Needs This Kind of Space

What We’re Listening For on The Three Cornered Hat

The hall the Suisse Romande recorded in was possibly the best recording venue of its day, possibly of all time; more amazing sounding recordings were made there than any other hall we know of. There is a richness to the sound that exceeds all others, yet clarity and transparency are not sacrificed in the least. It’s as wide, deep and three-dimensional as any, which is of course all to the good, but what makes the sound of these recordings so special is the weight and power of the brass and the timbral accuracy of the instruments in every section.

This is the kind of record that will make you want to take all your Heavy Vinyl classical pressings and put them in storage. Practically none of them can ever sound the way this record sounds. Quality record production is a lost art, and it’s been lost for a very long time.

The premiere was a resounding triumph. Martínez Sierra summed it up: “There is no need to mention the success of The Three-Cornered Hat which was choreographed and danced by Massine—who studied Flamenco dances in depth and who admits to having found many beautiful poses in bullfighting—and designed and costumed by Picasso. Anyone interested in theatrical music will know that within a few months the work had earned the category of a ‘classic’ and since then has been placed in the annals of great ballets such as Petrushka and Schéhérazade.”

Ernest Ansermet is something of a legend in classical music lore. Like conductor Thomas Beechum, he did not have a lot of formal training. Also like Beechum, he formed his own orchestra: L’Orhestra de la Suisse Romande. And, should you be considering this recording, he conducted the premier of “El Sombrero de Tres Picos” in 1919, which makes him special indeed. This particular recording of the “Three-Cornered Hat” was made in 1961, and had the benefit of Decca’s state-of-art recording equipment.

Finally, this, from the liner notes: “There have been more technically polished recordings of these works by Falla; the ensemble here is not always faultless and the recording balances are not ideal; against that, they show a matchless sense of tempo and musical form, an acute sense of orchestral color combined with rhythmic energy.