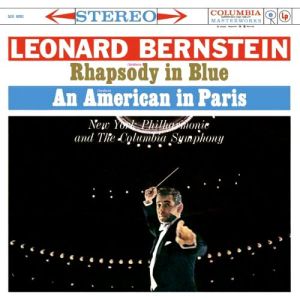 *NOTE On side one, a mark makes 6 moderately-loud pops about two and one-half inches into Rhapsody In Blue.

Here is the sound we’ve been searching for – rich, tubey and real, with nicely textured strings. The piano is solid, rich, high-rez and percussive — there is hardly any Old School smear to be heard, always important to proper piano reproduction.

This Columbia 6-Eye Stereo pressing has the kind of Tubey Magical Midrange that modern records rarely even BEGIN to reproduce. Folks, that sound is gone and it sure isn’t showing signs of coming back. If you love hearing INTO a recording, actually being able to “see” the performers, and feeling as if you are sitting in the studio with the orchestra, this is the record for you. It’s what vintage all analog recordings are known for — this sound.

An American In Paris

Because George Gershwin’s Rhapsody in Blue is one of the most beloved American masterpieces, most people who have taken an interest in his music have come to know it quite well and have usually adopted a favorite recording already.

Among American performers who made a splash playing this piece, Leonard Bernstein may not have given the most fastidious, note-perfect performance, but he made this impressive recording with the Columbia Symphony Orchestra in 1959 a true reflection of his charismatic, flamboyant personality.

Paired with his buoyant 1958 performance of An American in Paris with the New York Philharmonic, Bernstein’s rendition of Rhapsody is lively, flashy, bluesy, and intensely romantic in feeling, and these positive characteristics no doubt contributed to keeping this album in print for many years as one of Columbia’s great successes.

An American in Paris

The piece is a true tone poem, inspired by extra-musical considerations — the sights, sounds, and moods of Paris.

Deems Taylor, the 1920s composer and critic, furnished a blow-by-blow program for the piece from which I quote a brief excerpt: “You are to imagine an American visiting Paris, swinging down the Champs-Elysées on a mild sunny morning in May or June….Our American’s ears being open as well as his eyes, he notes with pleasure the sounds of the city. French taxicabs seem to amuse him particularly.”

Although he claimed not to have a program in mind when he wrote the work, Gershwin did sketch his own general scenario: “[A]n opening section, in which an American visitor strolls about Paris and ‘absorbs the French atmosphere,’ is followed by a rich blues with a strong rhythmic undercurrent,” representing an episode of homesickness on the visitor’s part. But the American overcomes his spell of depression and once again revels in the sights and sounds of Paris. “At the conclusion,” according to the composer, “the street noises and French atmosphere are triumphant.”