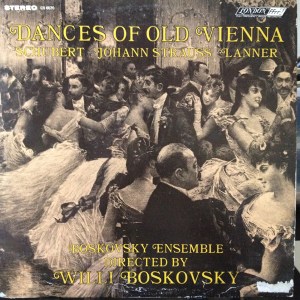 Wow, what a find! This is a WONDERFUL sounding record with vintage Decca / London sound. Even as late as 1968 Decca was still able to produce recordings that are tonally correct from top to bottom and full of tubey magic. There is not a trace of hyped-up sound to be found on this record. It’s unbelievably spacious and three-dimensional, with depth to rival any recording you may own.

One reason the recording is as spacious as it is is that this is a fairly small ensemble, not a huge orchestra, playing in a lively hall, exactly the kind of hall in which this music was meant to be heard. The reason everything disc sounds right is that both the sound and the music are authentic to these works in practically every detail.

And the performances are vivid and lively as well, with Boskovsky himself playing the violin as well as directing the other players. It should be noted that the solo violin parts are especially lovely sounding. There is a transparency and ease to the sound that is not often heard in vintage recordings, and that, coupled with the tubey magic, richness and sweetness found throughout, make this a very special record indeed.