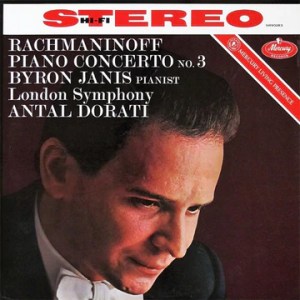 Not only is the sound amazing — yes, it’s on the TAS Super Disc list, and for good reason: a copy as good as this one really is a Super Disc — but this copy has another vitally important characteristic that most copies of the record do not: no Inner Groove Distortion.

We can’t begin to count the times we have had to return (or toss) a copy of these famous Byron Janis records because the piano breakup for the last inch or so of the record was just unbearable. That’s a sound no serious listener could possibly tolerate, yet I would venture to guess that a great many Mercury Piano Concerto recordings suffer from this kind of groove damage.

Enough about those typically bad copies, let’s talk about how good this one is!

This is an exceptionally quiet early Mercury Plum label stereo pressing of one of Byron Janis’s most famous performances (along with the Rachmaninoff 1st. It’s a longtime member of the TAS Super Disc list.

The sound is rich and natural, with lovely transparency and virtually no smear to the strings, horns or piano. What an amazing recording! What an amazing piece of music.

The recording is explosively dynamic and on this copy, the sound was positively jumping out of the speakers. In addition, the brass and strings are full-bodied, with practically no stridency, an unusual feat the Mercury engineers seem to have accomplished while in Russia.

Big, rich sound can sometimes present problems for piano recordings. You want to hear the percussive qualities of the instrument, but few copies pull off that trick without sounding thin. This one showed us a piano that was both clear and full-bodied.

With huge amounts of hall space, weight and energy, this is DEMO DISC QUALITY SOUND by any standard. Once the needle has dropped you will quickly forget about the sound (and all the money you paid to get it!) and simply find yourself in the presence of some of the greatest musicians of their generation, captured on the greatest analog recordings of all time.

What the Best Sides of Rachmaninoff’s Piano Concerto No. 3 Have to Offer Is Not Hard to Hear

The piano is huge and powerful, yet the percussive and lighter qualities on the instrument are clearly heard in proper relation to the orchestra as a whole.

A Must Own Concerto

This wonderful work for piano and orchestra, one of the greatest ever composed. There is no question it should be part of any serious Classical Collection.

The Piano Concerto No. 3 in D minor, Op. 30, composed in 1909 by Sergei Rachmaninoff (colloquially known as “Rach 3”) is famous for its technical and musical demands on the performer. It has the reputation of being one of the most technically challenging piano concertos in the standard classical repertoire.

Rachmaninoff called the Third the favorite of his own piano concertos, stating that “I much prefer the Third, because my Second is so uncomfortable to play.” Nevertheless, it was not until the 1930s and largely thanks to the advocacy of Vladimir Horowitz that the Third concerto became popular.

Following the form of a standard concerto, the piece is in three movements:

The first movement revolves around a diatonic melody that soon develops into complex pianistic figuration. The second theme opens with quiet exchanges between the orchestra and the piano before fully diving into a slower theme in a major key. The first part of the first theme is restated before the movement is pulled into a loud development section which opens with toccata like quavers in the piano and reaches a loud chordal section. The whole development exhibits features similar to a canon, such as an eighth note passage in the piano in which the left hand and the right hand play overlapping figures. The movement reaches a number of ferocious climaxes, especially in the cadenza. The first theme in its full form reappears just before the coda. Rachmaninoff wrote two versions of this cadenza: the chordal original, which is commonly notated as the ossia, and a second one with a lighter, toccata-like style. In his recording of the concerto, the composer used the second cadenza. Both cadenzas lead into a quiet solo section including the flute, clarinet and horn accompanied by delicate arpeggios in the piano. The piano then restates the first theme in its entirety and closes with a tutti, silent, rippling coda reminiscent of the second theme.

The second movement is opened by the orchestra and it consists of a number of variations around a single lush, heavily romantic melody following one another without a rigid scheme. The melody soon transitions to a tonic major which is the second theme. After the first theme development and recapitulation of the second theme, the main melody from the first movement reappears, before the movement is “closed” by the orchestra in a manner similar to the introduction. Then the piano gets the last word in with a short “cadenza-esque” passage which transitions into the last movement without pause. Many melodic thoughts of this movement allude to Rachmaninoff’s second piano concerto, third movement, noticeably the Russian-like, E-flat major melody.

The third movement is quick and vigorous and contains variations on many of the themes that are used in the first movement, which unites the whole concerto cyclically. However, after the first and second themes it diverges from the regular sonata-allegro form. There is no conventional development; that segment is replaced by a lengthy digression using the major key of the third movement’s first theme, which then leads to the two themes from the first movement. After the digression, the movement recapitulation returns to the original themes, building up to a toccata climax somewhat similar but lighter than the first movement ossia cadenza and accompanied by the orchestra. The last movement is concluded with a triumphant and passionate second theme melody in D major. The piece ends with the same four-note rhythm – claimed by some to be the composer’s musical signature – as the composer’s second concerto.

Rachmaninoff authorized several cuts in the score, to be made at the performer’s discretion. These cuts, particularly in the second and third movements, were commonly taken in performance and recordings during the initial decades following the Concerto’s publication. More recently, it has become commonplace to perform the concerto without cuts. A typical performance of the complete concerto lasts about forty minutes.