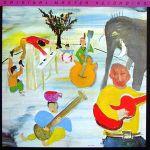 It’s very possible, even likely, that they restored some of the bass that’s missing from the originals. But bad half-speed mastered bass — poorly defined, never deep and never punchy — is that the kind of bass that would even be desirable?

And note also that when you play your records too quietly it results in an exaggerated, artificial sense of depth. That’s one of the main reasons we play them loud; we want to hear the pressings that have real presence and immediacy, because they’re the ones that are most likely to win our shootouts.