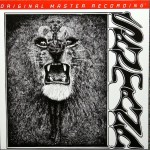 This is one of the MoFi LPs we’ve reviewed on the old site. And for us audiophile record lovers – not lovers of audiophile records, but guys who love records with audiophile sound – it’s simply another nail in the coffin for one of the most laughably inept remastering labels in the history of that unrelievedly sad enterprise.

We also have a Hall of Shame for bad sounding audiophile records such as these. It currently has 250 members but could easily have double that if someone wanted to take the time to make entries for all the bad audiophile pressings we’ve played over the years. (That person would have to be me and I don’t want to do it.)

I noted in my [now discontinued] web site blog: “But now I would have to say that the MoFi LP is far too lifeless to be acceptable to anyone, even those with the worst kinds of Audiophile BS systems.”

And I noted that the Abraxas they remastered never got past the first elimination round; it had to have been one of the worst half-speeds I have ever heard. Dead dead dead as a doornail.

On another note, we played some godawful sounding MOFI pressings a few years back:

Linda Ronstadt (which appears to be out of phase, more on that down the road); {which we never did because we lost interest, something that happens a lot with these Heavy Vinyl pressings!]

Metallica (with blobby bass at 45 RPM no less; only half-speed mastering can guarantee muddy bass under any and all circumstances!); and

Rush (nothing even resembling a top end. How do these things happen?).

These three albums have to be some of the worst sounding vinyl I have ever heard in my life. I won’t waste any more of your time or mine talking about them. Buy them if you feel the need, and if you like what you hear, drop us a line. Maybe the copy we cracked open was a “bad” one, unrepresentative of the general pressing run in the same way that the latest Crisis half-speed was.