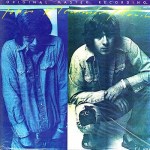 More of the Music of John Klemmer

Mobile Fidelity, maker of some of the worst sounding records in the history of the medium, is the KING on this title.

Klemmer says pure emotion is what inspired the album’s creation. Whatever he tapped into to find the source of that inspiration he really hit pay dirt with Touch. It’s the heaviest smooth jazz ever recorded. Musically and sonically, this is the pinnacle of Klemmer’s smooth jazz body of work. I know of none better. (If you want to hear him play more straight-ahead jazz try Straight from the Heart on Nautilus.)

MoFi was famous for demonstrating on an actual scope that the standard domestic ABC pressing had nothing above about 8 or 10 thousand cycles up top, which is why they all sound insufferably dull and dead. Some MoFi copies have no real top end either, which is the reason to we do these shootouts — to find the copies that are actually mastered and pressed right, not just the ones that should have been.

There’s plenty of information above 15K I would guess on this record — all those delicate percussion instruments ring so sweetly, the highs have to be extending way up there. (This album would probably make a good test to see how well your tweeters work, as well as for turntable setup. The right tracking weight and VTA are crucial to getting all the harmonics of a record like this right.)

At Least Three Sets of Stampers

Did you know there are three different stamper numbers for both sides? I used to think that the later pressings cut with the Ortofon system, the same cutting system used to make the highly regarded but usually awful sounding UHQRs, were the best, but having done this shootout with eight copies I now know different.

I also used to think the original pressings were dull, but this too is not the case. Some of the early pressings were the best sounding in our shootout. As we like to say, if you’ve been making regular improvements to your stereo and record cleaning regimen — as you should be — then you can’t possibly know the sound quality of any record you haven’t played in a while.

Throw out all your biases and old thinking and find out what’s really going on with the records you own.

This record used to be on the The Absolute Sound Super Disc List. I was browsing an issue from the early ’80s and there it was on the latest updated list.  It’s one of the few audiophile pressings that really does belong on a Super Disc list.