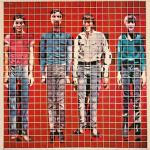 With Our Love turned out to be one of our favorite tests for side one. The picking of the rhythmic guitar in the intro told us just about everything we needed to know about smear, veiling and resolution. On most copies the instrument is simply blurry, the notes mashed together. When you’ve got a copy with its transients intact, resolving properly and clearly right there in front of you, you have the makings of a Hot Stamper side one.

Pay attention to the opening before the keys start. The best pressings give you texture on the bass that you won’t find on the most. When everything’s working right you’ll also hear ambience around the organ that’s nowhere to be found on the typical LP.

The bass should be tight, punchy, and fairly deep. We wouldn’t mind if some of the tracks were mixed with a bit more punch to the bottom end, but far be it from us to tell Brian Eno and Rhett Davies how to do their jobs. At least on some copies the bass has the kind of power that brings a song like Take Me To the River to heights you probably wouldn’t have imagined it could go.

I don’t think these guys ever put together a better group of songs. The ultimate pressings of Little Creatures go a step further sonically, but the best copies of this one can sound incredible, if not quite Demo Disc worthy.

Along with More Songs About Buildings And Food, Remain in Light, Fear Of Music, and Little Creatures are all works of genius. ’77 is full of good ideas, but it doesn’t sound like a fully realized work of art the way the next four albums did. Still, all five belong in any serious person’s music collection.