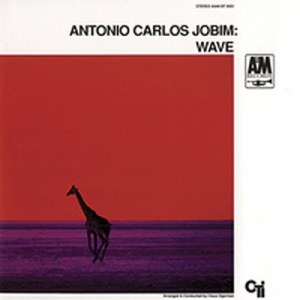 This vintage A&M/CTI pressing has the kind of Tubey Magical Midrange that modern records can barely BEGIN to reproduce. Folks, that sound is gone and it sure isn’t showing signs of coming back. If you love hearing INTO a recording, actually being able to “see” the performers, and feeling as if you are sitting in the studio with the band, this is the record for you. It’s what vintage all analog recordings are known for — this sound.

What We’re Listening For on Wave

Wave
The Red Blouse
Look to the Sky
Batidinha
Triste

When Creed Taylor left Verve/MGM for his own label under the auspices of A&M, he quickly signed Antonio Carlos Jobim and they picked up right where they left off with this stunningly seductive record, possibly Jobim’s best. Jobim contributes his sparely rhythmic acoustic guitar, simple melodic piano style, a guest turn at the harpsichord, and even a vocal on “Lamento,” while Claus Ogerman lends a romantically brooding hand with the charts. A pair of instant standards are introduced (“Wave,” “Triste”), but this album is to be cherished for its absolutely first-rate tunes — actually miniature tone poems — that escaped overexposure and thus sound fresh today.