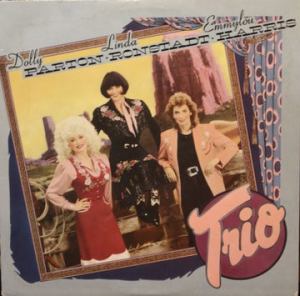 *NOTE: On side two, a mark makes 4 soft ticks during the intro to Track 5, Farther Along.

With three brilliant and accomplished singers harmonizing in the studio you can imagine that faultless midrange tonality is key to the best copies, and you would be right.

Some copies had the girls’ sounding a bit dark and veiled. Some had them a bit thin and bright. The Goldilocks Principle comes into play here as it does in so many of our shootouts: the best copies find the right balance of richness and clarity.

What the best sides of Trio have to offer is not hard to hear:

And what richness! How did so much Tubey Magic get recorded onto a tape produced in the dark ages of 1987? I can’t think of another recording from the period that sounds this good.

A big fat solid snare, full-bodied yet breathy vocals, huge amounts of space around the musicians, a wide and deep stage, dead-on tonality from top to bottom — once we got into our shootout, these unexpected sonic qualities took us completely by surprise.

As a point of comparison, I am not aware of any Emmylou Harris album that is as well recorded as Trio. As for Linda, only her best ’70s recordings are this rich and natural. Can’t say much about Dolly’s albums as we have never done a shootout for one, not that we wouldn’t like to.

What We’re Listening For on Trio

The musicians George Massenburg recruited to play on Trio are some of the best in the business. Their contributions to the success of the album simply cannot be overestimated.

Even after all these years I still maintain that Albert Lee put on the single best guitar performance I have ever seen in my life. Caught him in a local bar about ten years ago; he played a set I still remember being awed by to this day. He’s known as a guitarist’s guitarist — you often see him on stage for the one-of big shows Clapton, Ringo and other heavy hitters put on for charity and such like.

Bringing together Emmylou Harris, Dolly Parton, and Linda Ronstadt for the album Trio was a truly inspired idea, and not simply because they were three of the finest voices in country and pop music at the time.

While a gifted entertainer, Parton is also a business-savvy professional who will willingly set aside her gifts as a pure country singer if she thinks her audience would rather hear something like “Nine to Five.” However, give her a stage for old-school country material, and she will always rise sublimely to the occasion.

Similarly, some of Linda Ronstadt’s finest work was on her early country-rock albums (especially Heart Like a Wheel)…

And while Emmylou Harris had as strong a track record as anyone in Nashville in the 1980s, it’s obvious she loves to collaborate with others, and sings harmonies with the same rich and affecting beauty that she brings to her headlining gigs. So you take two gifted artists who need proper direction, team them up with an excellent collaborative artist, and the results should fall neatly into place.

Harris, Parton, and Ronstadt also make the most of a set of fine songs (certainly a better program than Parton or Ronstadt had taken on in the studio in a while), and producer George Massenburg lined up a wonderfully subtle and intuitive backing group, with Ry Cooder, David Lindley, and Albert Lee picking gloriously without calling undue attention to themselves.

In short, Trio is that rare example of an all-star collaborative effort that truly shows everyone involved to their best advantage, and it ranks with the best of all three headliners’ work.