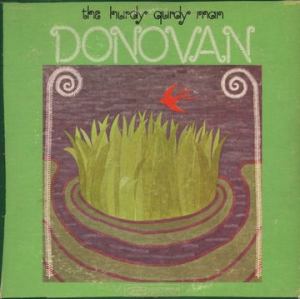 An outstanding pressing of what we consider Donovan’s best album, musically and sonically. The 1968 sound here is wonderful — rich, sweet, Tubey Magical and very, very Analog.

Donovan records tend to be hit or miss affairs, but we were pleasantly surprised to find that we could not find a bad track on either side of the album. Most are in fact quite wonderful.

Both Yellow Label Epics and Orange Label Epics fared well in our shootout. (We could find no Blue/ Black later labels to play.) Finding any pressing with clean surfaces was another matter, but we managed to have a pretty healthy group with which to do our shootout.

Some of these tracks may remind you more than a little of Pentangle. Danny Thompson, that band’s amazingly talented and unusually well recorded double bassist, just happens to be the bass player on the album. Go figure. Tony Carr does most of the drumming as he has on many of Donovan’s albums from the period. Needless to say, the rhythm section is first-rate.

What the best sides of The Hurdy Gurdy Man have to offer is not hard to hear:

What We’re Listening For on The Hurdy Gurdy Man

… HURDY GURDY MAN further benefits from eastern Indian classical influences as in previous inclusions of sitar, tablas, and other instruments, but takes these patterns a step further with the inclusion of harmonic drones. Chiefly used in Peregrine, The River Song, and Tangier, the effect is hypnotic. Those who enjoy and are familiar with Led Zeppelin’s song In The Light (Physical Graffiti) will appreciate the earlier use of this. Hurdy Gurdy Man itself was released as a very successful psychedelic-electric single and to that date was Donovan’s hardest rock song yet. The electric guitar leads swirled around the listener and no doubt Page contributed to this song! It charted to #4 on the Billboard charts and #5 in the UK. In addition to distorted guitar leads, an east Indian tambura is played by Donovan for seasoning on what would soon be labeled the “Celtic Rock” sound and what would eventually form into Led Zeppelin. The tambura was a gift from George Harrison.

… Most of the other songs on the original album are uplifting, accessible, pop-rock numbers with a splash of jazz or Caribbean flavor, rounding out an excellent album of the highest musicianship, lyric writing, and songcraft from an era. Get Thy Bearings, West Indian Lady, and Teas are significant standouts, but HURDY GURDY MAN is the one Donovan album I pick out as perfect with no warts. Even the bonus material on the CD is the best addition out of all four of the EMI reissues. Laleña already covered above, is accompanied by its B-side Aye My Love and the B-side from Hurdy Gurdy Man single, Teen Angel, both are fine songs. Poor Cow, the B-side to Jennifer Juniper was written for and used in the film of the same name, another very poignant song. What A Beautiful Creature You Are is a duet sung with the amazing Lulu, an infectious, happy, and slightly sexy song with a wisp of Jamaica Mon! Finally, HURDY GURDY MAN is rounded out by the bonus track addition of re-recorded (and actually better sounding) singles of Colours and Catch The Wind which first made their appearance on Epic Records 1969 release of Donovan’s Greatest Hits, when Pye Records would deny them access to his first two hit singles. Including them here was pure genius on the part of EMI!

I’ve given all five of the “hippy” albums, and the small label pastiche Catch The Wind folk album, 5-Stars, but I would like to say that HURDY GURDY MAN, for me, is the 5th Star above the others. Stellar!