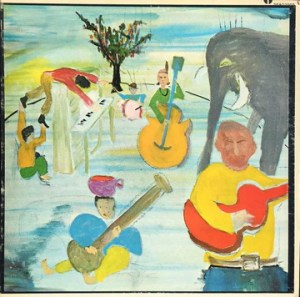 We guarantee you have never heard Music from Big Pink sound as good as it does on this very copy. There’s plenty of the all-important Tubey Magic and real weight to the bottom. You’ll have a VERY hard time finding one that sounds this good, if our experience is any guide.

This copy has the kind of sound we look for in a top quality Band record: immediacy in the vocals (so many copies are veiled and distant); natural tonal balance (most copies are at least slightly brighter or darker than ideal; ones with the right balance are the exception, not the rule); good solid weight (so the bass sounds full and powerful); spaciousness (the best copies have wonderful studio ambience and space); and last but not least, transparency, the quality of being able to see into the studio, where there is plenty of musical information to be revealed in this sophisticated recording.

If you’ve ever played a pressing of this record you probably know what absolute pieces of garbage most of them are.

Most suffer from a severe lack of bass. As you may have noticed, we’re big bass fans around these parts, so a bass-free Big Pink just won’t do.

Clean pressings of Music From Big Pink with this kind of sound are not common to say the least. Finding a copy with proper tonality from top to bottom turns out to be a much more difficult prospect than one would think. Too many are thin, with painfully boosted upper midranges, and that EQ results in blary, gritty, grainy sound.

When you finally come across a pressing like this, correct and natural, with plenty of Tubey Magic, more than anything it comes as a RELIEF. It shouldn’t have to be this way — for this or any other album — but it is.

What We’re Listening For on Music From Big Pink

This Demo Disc Quality recording should be part of any serious Popular Music Collection. Others that belong in that category can be found here.

… an album that reflected the turmoil of the late ’60s in a way that emphasized the tragedy inherent in the conflicts. Music from Big Pink came off as a shockingly divergent musical statement only a year after the ornate productions of Sgt. Pepper, and initially attracted attention because of the three songs Bob Dylan had either written or co-written.

However, as soon as “The Weight” became a minor singles chart entry, the album and the group made their own impact, influencing a movement toward roots styles and country elements in rock. Over time, Music from Big Pink came to be regarded as a watershed work in the history of rock, one that introduced new tones and approaches to the constantly evolving genre.