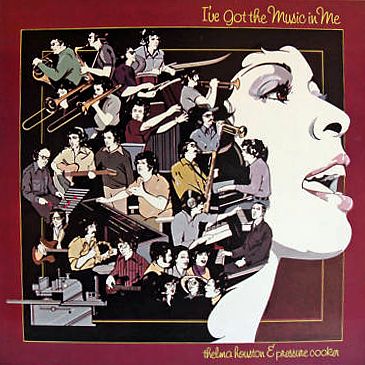 Bottom line? You got to play ’em, just like any other record. If no two records sound the same, it follows that no two audiophile records sound the same, a fact that became abundantly clear very early on in the listening. Of course not many audiophiles are in a position to shootout eight or ten copies of I’ve Got The Music In Me, and I’m not sure most audiophiles would even want to. Here at Better Records we have a whole system set up to do exactly that, so we waited until we had a pile of them gathered together, cleaned them all up, and off to the races we went.

What the best sides of I’ve Got the Music in Me have to offer is not hard to hear:

Unlike most Direct to Disc recordings, this album actually contains real music worth listening to — but only when the pressing lets the energy of the musicians through, with some sort of fidelity to the sounds of their instruments. Brass without bite is boring. Drummers who drum too delicately will bore you to tears.

Talk about DYNAMIC VOCALS. To Know You Is to Love You has the potential to come right at you in a truly shocking way. She can get LOUD. It sounds like there is virtually no compression on Thelma’s vocals at all. There has to be a limiter of some kind, but when she starts really belting it out you will not believe how powerfully she can sing. Might just give you goosebumps.

This could easily be the most dynamic vocal recording you have ever heard. It’s right up there at the top for us too.

Loads of presence, with richness and fullness that showed us just how good the Direct to Disc medium at its best can be. It had everything going for it from top to bottom, with big bass, dynamics, clarity, top end extension (so silky up there!) and ENERGY. Make no mistake, this here is a real Demo Disc. The sound is Wall to Wall.

One thing Sheffield got right is tonally-correct, realistic, believable brass in a natural acoustic space. This is precisely where For Duke fails so miserably, although no one ever seems to notice or bothers to write about it. To me that dead acoustic is like fingernails on a blackboard, completely inappropriate to the sound. In real life you would never hear a jazz band like that play in a dead room like that, so why on earth would you want to record one that way? It’s just plain dumb, no matter how good your mics are or how clean your signal path might be.

Thelma Houston teamed with the band Pressure Cooker in the early ’80s, doing a fusion/instrumental pop/R&B/soul work for Sheffield Labs. That affiliation ensured that it would be brilliantly engineered, and it sounded spectacular, especially for an early ’80s release