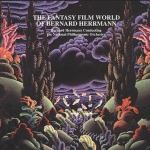 If on the other hand, you have done the work and spent the money, this is the album that will show you what you have achieved.

Most copies of The Fantasy Film World, whether they have a Decca label or a London one (all of the ones we are selling are mastered and pressed by Decca; some get one label and some get the other) leave much to be desired.