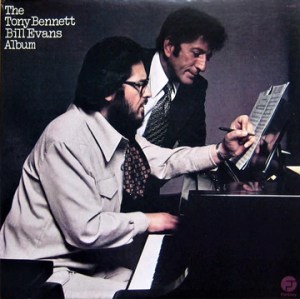 If you like sophisticated vocal jazz I don’t think you can do much better than this record, especially when it sounds like this. Tony Bennett’s voice sounds wonderfully rich, BREATHY, and above all REAL.

The soundstage is open and spacious, the piano full-bodied and clear, and the vocals have the clarity and fullness missing from most pressings. It’s incredible to hear these two top-notch musicians interacting and responding to each other in this kind of huge, open and natural space.

This brown label Fantasy pressing has the kind of Tubey Magical Midrange that modern records rarely even BEGIN to reproduce. Folks, that sound is gone and it sure isn’t showing signs of coming back. If you love hearing INTO a recording, actually being able to “see” the performers, and feeling as if you are sitting in the studio with the band, this is the record for you. It’s what vintage all analog recordings are known for — this sound.

What the best sides of this phenomenal collaboration have to offer is not hard to hear:

This is a studio recording in a fairly dead acoustic, worlds away from the echo-drenched sound of his Columbia releases, so for practically the first time on record you can really hear the man’s voice, not the echo chamber they used to process it.

Bill Evans may play the largest piano ever built — it stretches from wall to wall when played over here, not particularly realistic but nothing to get upset over. On the best copies it really has the clarity and heft of the real thing; you can hear the pedal being actuated in the quieter passages if you listen closely. The tonality is also dead on. (A good test for your stereo.)

The overall sound is open, spacious, and tonally correct from top to bottom. It’s a recording with no trace of bad mastering or phony EQ. (I can just imagine what Mobile Fidelity did to make it sound “better” when they remastered it.)

Waltz for Debby is the best thing here. You want to hear the Bennett-Evans Magic? Go right to that track.

Having completed his relatively brief sojourn with MGM/Verve with 1973’s Listen Easy, Tony Bennett was in the midst of forming his own label, Improv Records, when he made a deal with jazz pianist Bill Evans to cut two LPs, this one for Evans’ label, Fantasy Records, with another to follow on Improv. The singer and his collaborator (“accompanist” does not adequately describe Evans’ contribution, and in any case he received co-billing) got together in a recording studio over four days in June 1975 with no one other than the producer, Helen Keane and an engineer present, and quickly recorded one of the best albums of either’s career.

For Bennett, it was a dream project; for years (decades, actually), he had been balancing the demands of commerciality with his own inclinations toward jazz and affection for the songs of Broadway masters and of the Great American Songbook. Left to himself with a jazz partner, he naturally gravitated toward both interests. There were songs here that he had already recorded, but never in so unadorned and yet fully realized a fashion.

Evans was an excellent accompanist, using his steady left hand to keep his singer centered, but ready, whenever the vocals were finished, to go off into his characteristically lyrical playing.

Bennett could seem a bit earthbound when he came back in (he still wasn’t really a jazz singer), but his obvious enthusiasm for the project, coupled with his mastery of phrasing in songs he understood perfectly made him an equal in the partnership. As far as the major-label record business was concerned, the 46-year-old singer might have been over the hill and indulging himself, but in fact he was in his prime and finally able to pursue his ambitions unfettered, and that would prove itself a major boost to his career over time. For the moment, he’d made an excellent jazz-pop hybrid in which both musicians were shown off to advantage.