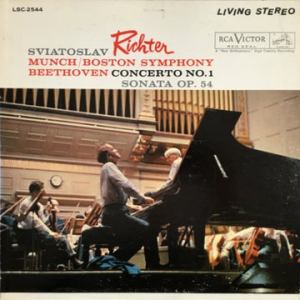 The piano is part of the orchestra, and properly sized, allowing the contributions of the other musicians in the orchestra to be heard more clearly, laid out as they are elegantly across a huge and deep Boston Symphony Hall stage.

In orchestral music, when it comes to clarity there is nothing close to the sound of the live performance, but some records, this one especially, give you the sense that you are hearing it all. Audio may be an illusion but it can be a very convincing one.

The spaciousness and three-dimensionality of the recording are also exceptional. Through the efforts and skill of the RCA engineers, that striking openness in the recording is somehow combined with an electrifying immediacy in the sound of the piano, no mean feat. One rarely hears both, except of course live (and not always even then).

There may be other performances of merit, but I know of no recording of this music with better sound. If you are demonstrating naturalistic sound, not bombastic Hi-Fi spectacularity, this pressing more than qualifies as a DEMO DISC.

What typically separates the killer copies from the merely good ones are qualities that we often look for in the records we play: transparency. Transparency allows you to hear into the recording, reproducing the ambience and subtle musical cues and details that high-resolution analog is known for. (Note that most Heavy Vinyl pressings being produced these days seem to be seriously Transparency Challenged. Lots of important musical information — the kind we hear on even second-rate standard-weight pressings — is simply not to be found.)

Solid weighty sound for a piano concerto recording is critically important as well. The piano has to be big, powerful, and solid and massive as a boulder, just the way it can be in the concert hall. In this respect it helps to have Sviatoslav Richter pounding away on the instrument of course.

What We’re Listening For on Piano Concerto, No. 1

Piano Concerto No. 1
Piano Sonata No. 22