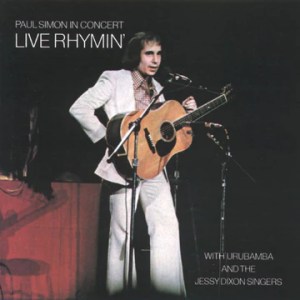 It is not easy to find copies of this album that can do this music justice. Most of the ones we’ve played are too murky and veiled to get into, but a copy like this one lets you bring Paul Simon’s early ’70s live show to life right there in your listening room!

It’s tough to find copies of this album that do what a live album is supposed to do — replicate the experience of the artists’ live show on your stereo. So many copies we played lacked the kind of presence and transparency you need to really hear what was happening on stage. Since Simon brought along a South American backing band and talented gospel singers to help him reinterpret these songs, you want a copy that allows you to hear everything that’s going on.

BIG and natural, this has all the energy of a live show. The vocals are clear and detailed, and mids are nice and full. It doesn’t get much better than this, folks.

On a Hot Stamper copy like this one, you can experience Simon’s live renditions of these wonderful songs without the mediocre sound of the typical pressing getting in the way.

What We’re Listening For on Live Rhymin’

One thing Simon & Garfunkel never did much was tour, so a Paul Simon solo tour, following two commercially succesful solo albums, was one more way for Simon to distance himself from the duo and, simultaneously, by performing songs like The Boxer and Homeward Bound, to reclaim his songwriting catalog.