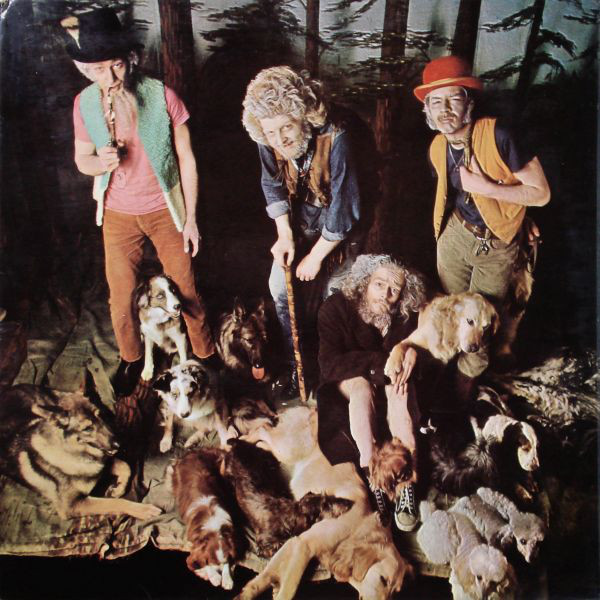 Folks, this is the best copy we are going to have on the site for a very long time. It took years and hundreds upon hundreds of dollars to get this shootout going and this killer copy is the result.

It’s very common for Jethro Tull records to lack bass or highs, and more often than not they lack both. (Think of your typical copies of Aqualung and Stand Up, for example.) The bass-shy ones tend to be more transparent and open sounding — of course, that’s the sound you get when you take out the bass. (90 plus percent of all the audiophile stereos I’ve ever heard were bass shy, no doubt for precisely that reason: less bass equals more detail, more openness and more transparency. Go to any stereo store or audiophile show and notice how bright the sound is. Ugh.)

If I had to choose, I would take a copy that’s a little dull on top as long as it still had a meaty, powerful, full-bodied sound over something that’s thin and leaned out. There are many audiophiles who can put up with that sound — I might go so far as to say the vast majority can — but I am not one of them. Small box speakers and screens are not for me. Those systems don’t do a very good job with bands like Jethro Tull, and a stereo that can’t play Tull is not one I would be very likely to own.

Of course one of the key elements to any Jethro Tull record is the sonic quality of the flute. You want it to be airy and breathy — like a real flute — and some copies will give you that, but keep in mind there are always trade-offs at work on old rock records like this. It’s a full-bodied, rich sounding recording. Make sure your system is playing it that way before you start to focus on the flute, otherwise you are very likely to be led astray.

Let’s face it, this is a Big Speaker Record. It demands to be played loud. It requires a pair of speakers that can move lots of air below 250 cycles. If you don’t own a speaker that can do that, this record will never really sound the way it should. It will certainly never come to life the way it should.

I’m not saying don’t buy it. Maybe one day you’ll get hold of a pair of big speakers and be able to play this record like a pro. (Considering the price of big speakers today, that’s not very likely unless you win the lottery, but we can always hope.)

We listed a White Hot copy of This Was in 2008 on the Island Pink label, and noted at the time:

Be forewarned: this ain’t Stand Up or Aqualung. I don’t think you’ll be using any copy of This Was to demo your stereo, because the recording has its share of problems. That said, this record sounds wonderful from start to finish and will make any fan of this music a VERY happy person. We guarantee you’ve never heard this album sound better, or your money back.

1). This album is a lot better sounding than we gave it credit for years ago. It’s not perfect by any means but it is much better than the above comments might lead you to believe.

We chanced upon an exceptional sounding copy of the album a couple of years back, and that taught us something new about the record:

2). The Pink Label pressings are not the ideal way to go on this album.

Once we heard the exceptional copy alluded to above, we played it against our best Pink Label copies and it was simply no contest.

The Pink Label original British pressings can be good, but they will never win a shootout up against copies with these stampers (assuming you have more than one copy – any record can have the right stampers and the wrong sound, we hear it all the time).