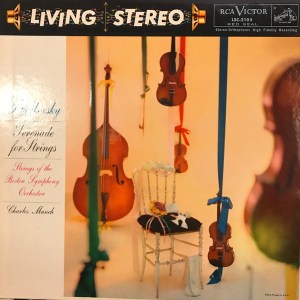 This original Shaded Dog pressing has WONDERFUL sound and exceptionally quiet vinyl for a record made in 1958. Like most recordings from the era, it has the strengths and weaknesses of simply-miked analog tapes recorded and mastered during The Golden Age. It’s every bit as RICH and Tubey Magical as one could ever want, but evidences some congestion in the loudest passages and a touch of tube smear even when quiet. With All Tube Mastering, this is of course to be expected.

The soundstage is especially wide on both sides but not quite as deep as one might expect. With more copies we could have done a better job of investigating the sound of the recording, but where does one find minty Shaded Dogs these days at affordable prices? Most of what we see is scratched and overplayed.

Be that as it may, the PERFORMANCE IS KING HERE — one of the greatest ever recorded, more powerful and more emotional than any with which we are familiar. This orchestra is on fire with this stirring music. If you haven’t heard Munch’s definitive performance, you haven’t really heard the Serenade for Strings. This is your chance to hear string playing that will have you sitting up in your chair, transfixed by the energy and enthusiasm of the Boston Symphony strings.

Also included here is Elgar’s Introduction and Allegro for Strings.

[T]he “artistic qualities” of the work were perceived from the very first time it was heard in public. The Serenade received its premiere performance in St. Petersburg, under the direction of Eduard Nápravník on October 30, 1881, when it was an instant success. Rubinstein – who six years earlier had devastated the composer when summarily pronouncing that the First Piano Concerto was “ill-composed” and “unperformable” – had nothing but praise for the work, declaring it “Tchaikovsky’s best piece”; he also enthusiastically told Jurgenson: “You can congratulate yourself on the publication of this opus.” Since then the Serenade has been continually acclaimed for its poise and lyric beauty.

In his conception of the Serenade, Tchaikovsky envisioned a work which falls somewhere between a symphony and a string quintet. The work is as personal as any of the composer’s symphonies and as intimate as his chamber music. In it, Tchaikovsky also pays tribute to his musical idol, Wolfgang Amadeus Mozart, who composed more than a dozen Serenades of various proportions and instrumentation.