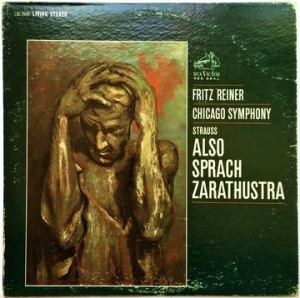 No doubt there’s more but we hope that should do for now. Playing the record is the only way to hear all of the qualitiercas we discuss above, and playing the best pressings against a pile of other copies under rigorously controlled conditions is the only way to find a pressing that sounds as good as this one does.

What We’re Listening For on this Classical Masterpiece

In his 1954 recording with the Chicago Symphony Orchestra for RCA Victor, re-released on Living Stereo, Fritz Reiner’s close familiarity with the score and personal relationship with Strauss himself add extra weight to the authority and importance of his interpretation of Strauss’s celebrated tone poem.

Richard Strauss’s tone poem Also Sprach Zarathustra (“Thus Spoke Zarathustra”) was composed in 1896 and inspired by Friedrich Nietzsche’s book of the same name, which was published between 1883 and 1891. The work had its first performance on 27 November 1896 in Frankfurt with Strauss himself as the conductor and has remained popular ever since, having become an integral part of the orchestral repertoire…

Divided into nine sections named after selected chapters of Nietzsche’s book, the piece opens with a sustained low C on the double basses, contrabassoon and organ, aided by a bass drum roll, until the famous “dawn” motif is introduced with its three notes in intervals of a fifth and octave (C–G–C). Also known as the nature motif, it is central throughout the work’s structure, while its adaptation for the opening of Stanley Kubrick’s 1968 cinematic epic2001: A Space Odyssey has further boosted the work’s enduring popularity.

A special place in the long interpretative history of Also Sprach Zarathustra no doubt belongs to the performance of the piece by the Chicago Symphony Orchestra and Fritz Reiner, a particularly acclaimed interpreter of Strauss who had worked closely with the composer before moving to the United States in the early 1920s.

Reiner’s close familiarity with the score and personal relationship with Strauss himself add extra weight to the authority and importance of his interpretation of Also Sprach Zarathustra. His great attention to detail, dynamics, and motivic interrelationships, while never losing focus of the greater whole is evident is his 1954 recording of the piece with the Chicago SO for Living Stereo. Reiner does an exceptionally good job in bringing out the nuances and tonal relationships of the score that, in return, aspires to convert Nietzsche’s elaborate philosophy into musical elements through challenging conventional notions of harmony and tonality.

Its great musical value aside, Reiner’s landmark recording is also of significant historical importance. His interpretation of Strauss’s magnificent tone poem has had a considerable impact upon subsequent renditions, such as the 1970 performance of the piece by the New York Philharmonic and Leonard Bernstein, who had been a pupil of Reiner at the Curtis Institute of Music in Philadelphia.