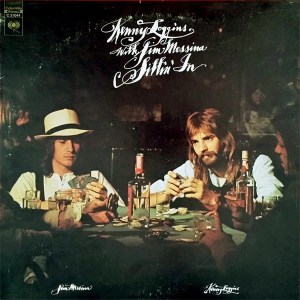 We love this album and have been playing it regularly since it came out in 1972. That’s a long time, and the good news is it just keeps getting better and better, like all the better records in your collection should.

What the best sides of Sittin’ In have to offer is not hard to hear:

What We’re Listening For on Sittin’ In

Practically any copy you find will have a bit of a boost in the bottom end. The kick drum really kicks on this album, more than it should in fact.

There is also a sibilance problem with the recording. Some copies keep it under control, while other, more crudely mastered and pressed ones, suffer greatly from spitty vocals, especially noticeable on Danny’s Song. The better copies will tend to have the “cleanest”, least-objectionable sibilance.

The best copies manage to keep the EQ anomalies within bounds, while giving us full-bodied pianos; rich, lively vocals, full of presence and brimming with enthusiasm; harmonically-rich guitars; and a three-dimensional soundstage, revealing the space around them all.

We’ve known for decades how good a test sibilance is for tables, cartridges, and arms. Sibilance is a bitch. The best pressings, with the most extension up top and the least amount of aggressive grit and grain mixed in with the music, played using the highest quality, most dialed-in front ends, will keep sibilance to a minimum. VTA, tracking weight, azimuth and anti-skate adjustments are critical to reducing the spit in your records.

We discuss the sibilance problems of MoFi records all the time. Have you ever read Word One about this problem elsewhere? I didn’t think so.

Audiophiles, and, shamefully, the expert audiophile reviewers who should know better, just seem to put up with these problems. Or ignore them, or — even worse — simply fail to recognize them at all.

Play around with your table setup for a few hours and you will no doubt be able to reduce the severity of the sibilance on your favorite test and demo discs (this one will do just fine as a test disc).

Nobody But You
Danny’s Song
Vahevala
Trilogy:
– Lovin’ Me
– To Make a Woman Feel Wanted
– Peace of Mind

This debut album was credited to Kenny Loggins with Jim Messina because the project had begun as a solo record by Loggins being produced by Messina. By the time it was finished, however, Messina had written or co-written six of the 11 songs, contributed “first guitar,” and shared lead vocals on many tracks. Messina’s “Nobody but You” and “Vahevala,” co-written by Loggins’ second cousin, Dave Loggins, were the singles chart entries, but today everybody remembers the album for Loggins’ “House at Pooh Corner,” which had earned Loggins his record contract, and “Danny’s Song,” which Anne Murray took into the Top Ten the following year.

The only thing wrong with this record is that it was too perfect — with their infectious blend of country, folk, rock and Caribbean music, L&M started out at the top of their game, and although they were able to match some of the material and performances on later records, the team never got any better than this.