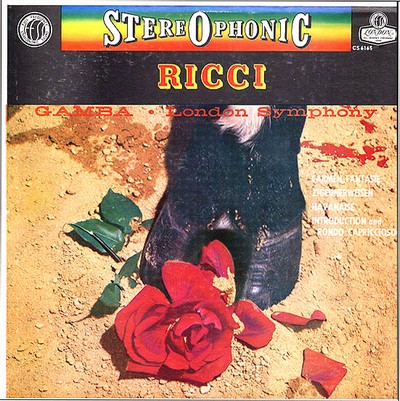 It just goes to show: No matter how good a particular copy of a record may sound to you, when you clean and play enough of them you will almost always find one that’s better, and often surprisingly better. Shootouts are the only way to find these kinds of records. Nothing else works. If you’re not doing shootouts (or buying the winners of shootouts from us) you simply don’t have top quality copies in your collection, except in the rare instances where you just got lucky. In the world of records luck can only take you so far. The rest of the journey requires effort.

When you play a copy of this record and hear a smeared, veiled violin, don’t be too surprised. When the orchestra comes in and is full of the worst kind of compressor distortion, likewise, this is not the least bit unusual, in fact it’s pretty much par for the course. The soundstage may be huge: spacious and 3-D; it is on most copies. But what good is a record of violin showpieces if the violin doesn’t sound right?

Side two here shows you how good the violin — and the whole orchestra — can sound. It’s tonally correct from top to bottom, transparent and sweet. The texture on the strings is PERFECTION. Ricci is a little more distant than he is on side one; these pieces are less about the “violin-in-your-lap” effect and more about the violin as an integrated member of the orchestra.

Of all the copies we played, this side had the most of a quality that goes a long way in the world of classical music. As we sent through the various copies, we noticed that the sound on this side was especially RELAXED. (Compare that to the typical Classic Records heavy vinyl pressing, which, on the relaxation scale of one to ten, rates a lot closer to one than it does to ten. Between one and two probably.)

Side one was not quite as rich and weighty as side two, so we marked it down to A++. Although it may not be the best side one we have ever played, it still ranks as an incredible DEMO DISC for the first piece, the reworking of Carmen by Sarasate as a showpiece for violin, which has violin fireworks the likes of which you may have never heard. Ricci is The King on these romantic works. His playing will leave you in awe of the man. It just doesn’t get much better than this.