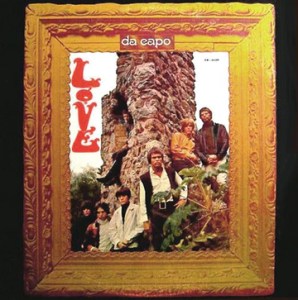 If you’re looking to demonstrate just how good 1967 All Tube Analog sound can be, this killer copy will do the trick. This Gold Label pressing is spacious, sweet and positively dripping with ambience. Talk about Tubey Magic, the liquidity of the sound here is positively uncanny. This is vintage analog at its best, so full-bodied and relaxed you’ll wonder how it ever came to be that anyone seriously contemplated trying to improve it.

This IS the sound of Tubey Magic. No recordings will ever be made like this again, and no CD will ever capture what is in the grooves of this record. Of course there’s a CD of this album, but those of us in possession of a working turntable and a good collection of vintage vinyl have no need of it.

Botnick Before The Doors

As engineered by Bruce Botnick, the right pressings give you the kind of low-end punch and midrange presence you hear on The Doors’ first album (when you play the right Gold Label originals). Botnick engineered them both, and they are two amazing sounding recordings that put to shame most of what was recorded in 1966 (not Revolver, obviously).

All tube from start to finish, the energy captured on these Hot Stamper pressings has to be heard to be believed. Not to mention the fact that the live-in-the-studio musicians are swimming in natural ambience, with instruments leaking from one mic to another, and most of them bouncing back and forth off the studio walls to boot.

But the thing that impresses us most is how much LIFE there is in the performances. Of course, unless you have a very special pressing there is almost no chance you have ever heard the band exhibit the kind of raw power that’s on this album. Not many rock albums recorded in 1967 can compete with it, not for energy and live-in-your-listening-room presence anyway.

No Classic Rock record without good bass can earn a top Hot Stamper grade. How could it? Bass is the rhythmic foundation of the music, and who wants a rock record that lacks rhythm? Bruce Botnick is famous for putting plenty of bass on his records; this album is no exception. The best copies have prodigious amounts of deep, note-like, well-controlled bass. If you have a high-fidelity full-range system with plenty of firepower down low, this is some serious Demo Disc Quality Classic Rock Sound.

What the best sides of this Love Classic from 1967 have to offer is not hard to hear:

Most audiophiles have no idea how well recorded this album is, simply because most original pressings are just too beat up to play on good equipment, and the reissues that are quiet enough to play rarely did a very good job of encoding the energy and life of the master tape onto their vinyl.

The first Love album is without a doubt the punchiest, liveliest, most POWERFUL recording in the Love catalog (all three albums of it).

I’m guessing this statement does not comport well with your own experience, and there’s a good reason for that: not many copies of the album provide strong evidence for any of the above qualities. Most pressings are opaque, flat, thin, veiled, compressed, lifeless and sound exactly the way so many old rock records sound: like an old rock record.

Stephanie Knows Who
Orange Skies
¡Que Vida!
Seven & Seven Is
The Castle
She Comes in Colors

The six songs that comprised the first side of this album when it was first issued are a truly classic body of work, highlighted by the atomic blast of pre-punk rock “7 and 7 Is” (their only hit single), the manic jazz tempos of “Stephanie Knows Who,” and the enchanting “She Comes in Colors,” perhaps Lee’s best composition (and reportedly the inspiration for the Rolling Stones’ “She’s a Rainbow”).”