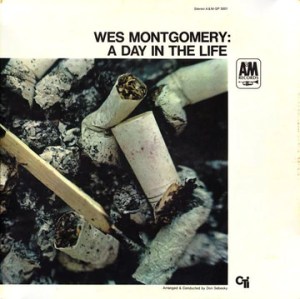 This superb album includes Montgomery’s great cover of A Day In The Life on side one and killer tracks like Eleanor Rigby, Willow Weep for Me, Windy and The Joker on side two!

It’s damn near impossible to find decent sounding early pressings, but the sound here is very good. There are plenty of dull, lifeless, overly compressed copies out there. That sound becomes especially offensive when the strings come in, most notably in the climactic middle section of “A Day In The Life.”

Fortunately for everyone who loves this kind of guitar-led jazz, our Hot Stampers have the warm, rich sound that let you enjoy this wonderful music without causing your ears to bleed.

The best copies produce tons of Tubey Magic to complement the excellent clarity, strong presence and wonderfully punchy bottom end. You get the top end extension that’s sorely lacking from most pressings, and the transparency is to die for.

This is one of our favorite orchestra-backed jazz records here at Better Records. A few others off the top of my head would be Wes Montgomery’s California Dreaming on Verve from the year before (1966, and also Sebesky-arranged), Grover Washington’s All the King’s Horses (1973) and Deodato’s Prelude (also 1973, with brilliant arrangements by the man himself).

What’s especially notable is how well-recorded the orchestra’s string sections are. They have just the right amount of texture and immediacy without being forced or shrill. They’re also very well integrated into the mix. I wouldn’t have expected RVG to pull it off so well — I’ve heard other CTI records where the orchestration was abominable — but here it works as well as on any album I know of.

This kind of warm, rich, Tubey Magical analog sound is gone forever. You have to go back a ways to find it!

What We’re Listening For on A Day in the Life

We’ve been digging this CTI jazz stuff for years. On the better albums such as this one, the players tend to sound carefree and loose — you can tell they’re having a heck of a time with the material. Don’t get me wrong — we still love the Blue Note and Contemporary label stuff for our more “hard core” jazz needs, but it’s a kick to hear top jazz musicians laying down these grooves and not taking themselves so seriously… especially when it sounds this good!

Give some credit to Don Sebesky (see tab above). His arrangements are brilliant. He also did the arrangements for another one of our favorite jazz guitar albums, Wes Montgomery’s California Dreaming. We love what Sebesky is doing on both albums, and both can have amazing sound on the best pressings.

And about two dozen string, wind and percussion players.

By the time Wes Montgomery recorded this album (his debut for A&M), he was a major name in the pop world. Montgomery’s melodic renditions of current pop hits caught on and were played regularly on Top 40 radio…

Of his three A&M recordings, A Day in the Life (the first one) was by far the best.