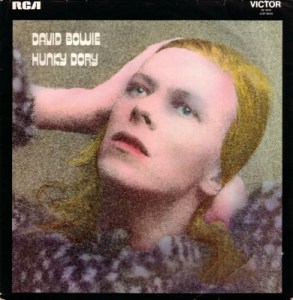 The amazing Ken Scott (Ziggy Stardust, Magical Mystery Tour, Honky Chateau, Crime of the Century (all Top 100), as well as All Things Must Pass, Truth, Birds of Fire, Son Of Schmilsson, America’s debut and many more is the man responsible for the sound here (he also produced the album, replacing Tony Visconti). It should go without saying that this is one seriously talented guy.

What We’re Listening For on Hunky Dory

Pressings of Hunky Dory typically suffer from one major shortcoming: a severe lack of presence in the midrange. Bowie sounds like he has a blanket over his head on 90% of the copies you might run into, import and domestic. I always just kind of expected to hear it that way for the rest of my life. Now I know better. Both sides of this copy show you the Hunky Dory that you always dreamed could exist, but had somehow proven elusive in the real world. Well, here it is!

In 2008 I had the opportunity to hear Ken speak at an AES meeting here in Los Angeles. This is the man who recorded some of the All Time Great Rock Albums, the likes of Crime of the Century, Ziggy Stardust, The White Album, Honky Chateau, All Things Must Pass, Son Of Schmilsson, America’s debut… this is one seriously talented guy!

I won’t bore you by trying to recap his talk, but if it ever comes out on youtube or the like, you should definitely check it out. The Behind-The-Scenes discussion of these artists and their recordings was a thrill for someone like me who has been playing and enjoying the hell out of most of his albums for more than thirty years.

Hunky Dory is a kaleidoscopic array of pop styles, tied together only by Bowie’s sense of vision: a sweeping, cinematic mélange of high and low art, ambiguous sexuality, kitsch, and class. Mick Ronson’s guitar is pushed to the back, leaving Rick Wakeman’s cabaret piano to dominate the sound of the album. The subdued support accentuates the depth of Bowie’s material, whether it’s the revamped Tin Pan Alley of “Changes,” the Neil Young homage “Quicksand,” the soaring “Life on Mars?,” the rolling, vaguely homosexual anthem “Oh! You Pretty Things,” or the dark acoustic rocker “Andy Warhol.” On the surface, such a wide range of styles and sounds would make an album incoherent, but Bowie’s improved songwriting and determined sense of style instead made Hunky Dory a touchstone for reinterpreting pop’s traditions into fresh, postmodern pop music.