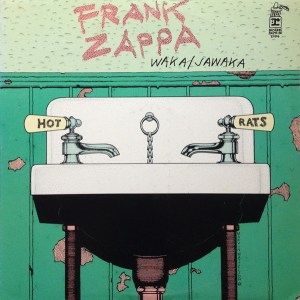 What an incredible album. I know of no other like it. It’s not big band, it’s not rock, it’s not jazz, it’s a unique amalgamation of all three with an overlay of some of Zappa’s idiosyncratic compositional predilections (say that three times fast) thrown in for good measure.

In our opinion it’s nothing less than Zappa’s MASTERPIECE, the summation of his talents, and a record that belongs in every right-thinking audiophile’s collection. (We say that about a lot of records audiophiles don’t know well, but we’ve been doing it for most of our 31 years in this business and don’t see much reason to stop now.)

Most copies, especially the WB brown label reissues, are dull and smeary with little in the way of top end extension, failing pretty miserably at getting this music to come to life.

Not long ago we discovered the secret to separating the men from the boys on side one. On the lively, punchy, dynamic copies — which are of course the best ones — you can follow the drumming at the beginning of ‘Big Swifty’ note for note: every beat, every kick of the kick drum, every fill, every roll — it’s all there to be heard and appreciated. If that track on this copy doesn’t make you a huge fan of Aynsley Dunbar, I can’t imagine what would. The guy had a gift.

What the best sides of Waka/Jawaka have to offer is not hard to hear:

The 17-plus-minute-long Big Swifty is a suite in which each section slowly, almost imperceptibly blends into the next, so that you find yourself in a completely new and different section without knowing how you got there — that is, until you go back and play the album and listen for just those transistions, which is what makes it worth playing hundreds and hundreds and hundreds of times.

One of the many high points of Big Swifty is the amazingly innovative trumpet work of Sal Marquez. He single-handedly turns this music into a work of GENIUS. I can’t imagine a more talented player. Zappa on guitar is excellent as well. Aynsley Dunbar plays his ass off, only falling short when it comes time to do his drum solo on the title track at the end of side two. The interplay of these superb rock musicians fits nicely into the tradition of great jazz/fusion artists.

And since the drumming throughout this record is so crucial to the music itself, a copy that really gets that right is one that is very likely to get everything right.

What more can I say? If you love Zappa you need this record. If you want to expand your musical horizons and hear big band like you’ve never heard it before, this is the record for you. I’ve listened to this album literally hundreds and hundreds and hundreds of times. It gets better every time I play it.

By the way, the Blue Label originals are the only way to go. I would avoid the reissues of Zappa’s albums; we’ve never heard a good one. And that includes the Classic Records reissue of Hot Rats.

What We’re Listening For on Waka/Jawaka

Although it doesn’t happen often, whenever Frank Zappa goes about the task of purging himself of his normal ration of acrimony, contempt, bile and phlegm, he sometimes comes forth with an album that is every bit the musical experience that he always claimed he could produce. With the exception of the astonishing work he and his musicians did on Hot Rats a couple of years ago, much of Zappa’s musical output has been too malnourished to support his artistic pretensions.

Waka/Jawaka — Hot Rats, while little more than a long delayed extension of the original Hot Rats album, is one of Zappa’s most enjoyable, less hypertense efforts, and while it may lack the tightness, the rock-based energy of its predecessor, it contains some of the best material he’s done in years.

The musicians brought in for Waka/Jawaka are not the stellar personalities that graced Hot Rats. Captain Beefheart and Sugarcane Harris are gone, replaced by newer faces that include Tony Duran on slide guitar, Sal Marquez on trumpets, and Don Preston on Moog and piano. They comprise a tight, disciplined group.

The first song is a 17-minute extravaganza called “Big Swifty,” which moves on the strength of Zappa’s guitar and Marquez’ horns through enough changes to add up to a solid modern jazz suite. It’s good, it stands up to repeated listenings, and is, along with the title cut, one of the best things on the album.

“It Just Might Be a One Shot Deal,” is good old Mothers’ music, a chaotic arrangement of acoustic, slide, Hawaiian, and pedal steel guitars, “Waka/Jawaka” rounds out the album with an 11-minute jazz improvisation.

Maybe Frank Zappa is just getting mellow for the first time in his career. Or maybe it’s just a phase. Either way, while Waka/Jawaka may lack the brilliance of Hot Rats, or the capacity for irritation that existed on some of the Mothers’ material, it’s a distinctive album. 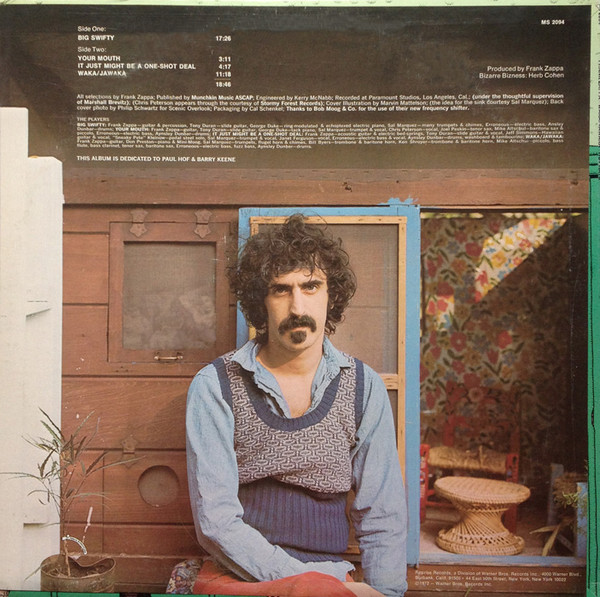 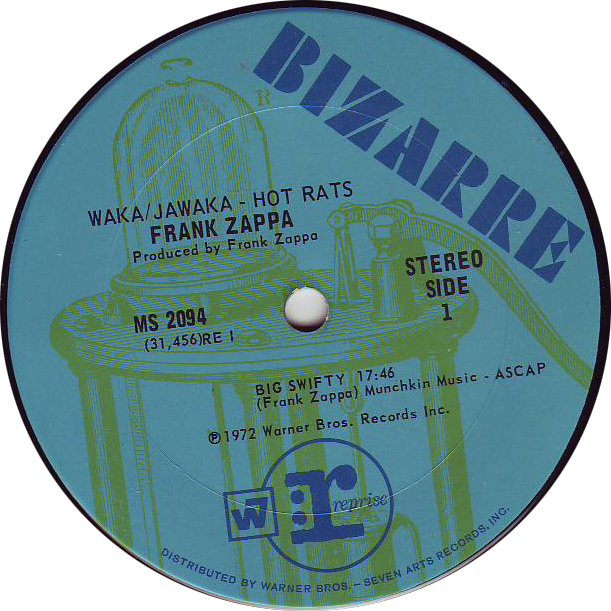