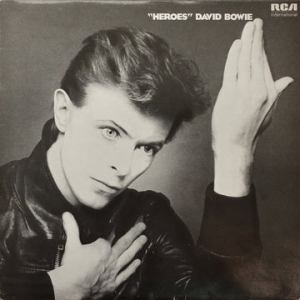 What the best sides of Heroes have to offer is not hard to hear:

What We’re Listening For on Heroes

It has taken us years to get this shootout going. The reason for the long delay is simple. The domestic pressings we had on hand to play were not exactly thrilling us and even the best of them are no better than acceptable, and not likely to win a shootout.

Even worse, our intuition that the British originals would sound the best also turned out to be incorrect. (In the audiophile record collecting world intuitions have a bad track record, but more than a few audiophiles — many of whom seem to be addicted to sharing their “record knowledge” on audiophile forums — are unaware of this unassailably true fact.) The original UK Orange Label pressings did not sound especially good to us, so we kept looking.

OK, I suppose we can afford to be a bit more charitable than that. Here goes: the one thing we’re pretty clear on from our efforts to date is that our best Hot Stamper offerings are sure to be pressed in the UK.

If you have a copy of this groundbreaking album and were never impressed with the sound of it, we have a potential solution to your predicament — depending on our inventory — a Hot Stamper pressing. It will show you the kind of sound you never knew could exist on Heroes.

Repeating the formula of Low’s half-vocal/half-instrumental structure, Heroes develops and strengthens the sonic innovations David Bowie and Brian Eno explored on their first collaboration. The vocal songs are fuller, boasting harder rhythms and deeper layers of sound. Much of the harder-edged sound of Heroes is due to Robert Fripp’s guitar, which provides a muscular foundation for the electronics, especially on the relatively conventional rock songs. Similarly, the instrumentals on Heroes are more detailed, this time showing a more explicit debt to German synth pop and European experimental rock. Essentially, the difference between Low and Heroes lies in the details, but the record is equally challenging and groundbreaking.