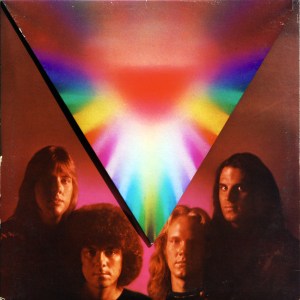 Alan Parsons produced this album, and at its best, it is truly a Demo Disc — if you have the system to play it.

This album needs lots of space and a big, wide, open soundstage if it’s going to work, and the best sides deliver that sound. It’s a rare copy that manages to have real presence and top end without getting too edgy; on the good ones, the bass is big, solid and punchy and the energy is superb.

This 20th Century pressing has the kind of Tubey Magical Midrange that modern records rarely even BEGIN to reproduce. Folks, that sound is gone and it sure isn’t showing signs of coming back. If you love hearing INTO a recording, actually being able to “see” the performers, and feeling as if you are sitting in the studio with the band, this is the record for you. It’s what vintage all analog recordings are known for — this sound.

What the best sides of Somewhere I’ve Never Travelled from 1976 have to offer is not hard to hear:

There is no question that this band, their producers, and their engineers sweated every detail of this remarkable recording. They went the distance. They brought in Alan Parsons to produce and engineer it. The result is an album that stands tall. It’s not prog. It’s not pop. It’s not rock. It’s Ambrosia — the food of the gods.

Harmonic coherency, richness, body and simply phenomenal amounts of Tubey Magic can be heard on practically every song.

This is some of the best High-Production-Value rock music of the ’60s and ’70s. The amount of effort that went into the recording of this album is comparable to that expended by the engineers and producers of bands like Supertramp, The Who, Jethro Tull, Yes, Pink Floyd and far too many others to list. It seems that no effort or cost was spared in making the home listening experience as compelling as the recording technology of the day permitted.

The only way to understand this Hot Stamper thing is to hear it for yourself, and that means having multiple copies of your favorite albums, cleaning them all up and shooting them all out on a good stereo. Nobody, but nobody, who takes the time to perform that little exercise can fail to hear exactly what we are all about.

Or you can join the other 99% of the audiophiles in the world, the ones who don’t know just how dramatic pressing variations for records and CDs can truly be. Some very large percentage of that group also doesn’t want to know about any such pressing variations and will happily supply you with all sorts of specious reasoning as to why such variations can’t really amount to much — this without ever doing a single shootout!

The band obviously has no sound of its own. But under the superb production of the ubiquitous Alan Parsons, the album never ceases to sparkle and entertain. Inside this musical scrapbook are two potential followups to last year’s hit, “Holdin’ On to Yesterday.” They are “Danse with Me George,” a song to George Harrison [not it’s not; it’s a song about George Sand, the novelist and lover of Chopin] and “I Wanna Know.” Complete with a cover that folds into a pyramid, this album would make a great gift for the fan who either has, or wants, everything.

One of the most interesting and ambitious newer groups out of L.A. delivers a fascinating, fine-textured work that is truly like a close-up into one of the most intriguing collective minds in today’s music. Ambrosia is one of the few groups that has mastered the technique of being both far-out galactic in scope of vision and mainstream AM commercial in execution. The seemingly crystal-clear production of Alan Parsons is a vital element of this sound, it would seem. All four members of the group write songs and sing leads, yet Ambrosia has a cohesive and distinctive style no matter which combination of personnel is providing the material. There is an unusual dreamlike quality that pervades its work. The songs seem to be reaching the listener direct from some strange and beautiful realm of the unconscious. It is an experience rare in popular music today or at any time. Ambrosia is the group that proves it is possible to make music within the scope of science fiction without meandering all over the place in meaningless instrumental flurries. Best cuts: “Somewhere I’ve Never Travelled,” “Runnin’ Away,” “We Need You Too,” “I Wanna Know,” “The Brunt.”

Stumbling Upon the Truth

Yes, the stereo got better and that helped a lot. Everything else we talk about helped too. But ultimately it came down to this: I had to find the right copy of the record. Without the right record it doesn’t matter how good your stereo is, you still won’t have good sound. Either the playback source has it or it doesn’t. It’s not what’s on the master tape that matters; it’s what’s on the record.

This may seem pretty obvious, but how many audiophiles do you know who own dozens of pressings of the same album and are still hunting around for more? I’ve been buying multiple copies of my favorite albums for decades, but I’m obsessive. And, since about 1987, with the advent of Better Records I’ve had an outlet for the pressings I chose not to keep.

A few audiophile friends have multiple copies, but most audiophiles I know usually stop after one, at most two or three, and they often make the worst mistake one could ever make: they buy an audiophile pressing and figure that that’s the one to keep, tossing out their original, or never bothering to buy an original in the first place. (And lest the above be mistaken for an endorsement of original pressings as opposed to reissues, let me state clearly that many, many reissues are sonically superior to the originals.)