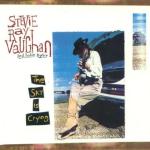 Little Wing ROCKS AS HARD on this Four Plus pressing as any song we have ever heard, with DEMO DISC SOUND to rival the greatest rock records of all time.

The Guitar Solos on Little Wing are as HUGE and LIVELY as any we have ever heard (assuming you have a copy that sounds like this one).

If you have BIG DYNAMIC SPEAKERS and the power to drive them to serious listening levels, you will be blown away by the sound found on the best copies of The Sky Is Crying.

This is one of the most blistering recordings of electric blues-rock we’ve ever played. Few other records recorded in the ’80s, or pressed in the ’90s, have this kind of BIG, BOLD SOUND. Maybe none. The sheer impact and wallop of this music is a real treat, but only if you have the right pressing (and the right kind of stereo to play it on, of course).

SRV – One of the Greats

Little Wing is the surest proof that SRV was one of the greats. to me it’s his clearest claim to fame. I know of no other guitar showcase to compete with it. Sonically it’s a knockout, with one of the tallest, widest and deepest soundstages I have ever heard on a record. It brings to mind Gilmore’s multiple solos on Money from the hottest Dark Side pressings. Wing deservedly won SRV the grammy in ’92 for Best Rock Instrumental. Click on the Little Wing tab above to learn more.

And, if you want to here Stevie channel Wes Montgomery instead of Jimi Hendrix, take a listen to Chitlins Con Carne!

Jimi Hendrix’s influence on Stevie Ray Vaughan was integral in shaping the young Texan’s style. In his career, Vaughan recorded multiple Hendrix covers, including “Voodoo Child (Slight Return)” and “Third Stone from the Sun,” adding signature elements to set them apart from their originals.

Although released posthumously on 1991’s The Sky Is Crying, “Little Wing” was recorded in 1984 at the Power Station in New York City. A music video of the song, with images of Vaughan and other blues guitar legends, was included with the concert video Live From Austin, Texas.

The posthumously assembled ten-track outtakes collection The Sky Is Crying actually proves to be one of Stevie Ray Vaughan’s most consistent albums, rivaling In Step as the best outside of the Greatest Hits collection… Vaughan makes the material resonate, and in light of his death, “The Sky Is Crying” and the touching survivor-story ballad “Life by the Drop” are two of the most moving moments in Vaughan’s oeuvre.