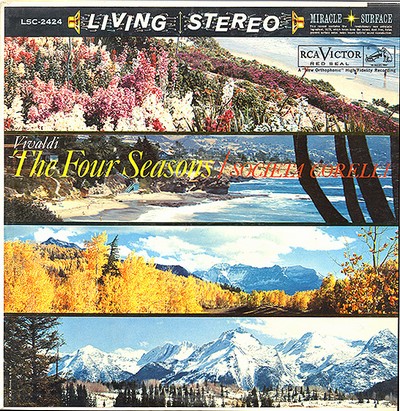 This KILLER RCA Shaded Dog has the kind of clarity, harmonic texture and freedom from smear that few Golden Age recordings can claim. Through the effort and skill of the RCA engineers, that striking openness in the recording is combined with an immediacy in the sound of the lead string players, no mean feat. One rarely hears both, except of course in live performance.

This is an excellent record to test with. As you no doubt know, there is a lot of “action” in this piece of music. To get the strings to sound lively yet natural is a bit of a trick. When I first played this record years ago I was none too happy about the string tone. After making a few tweaky adjustments, the strings became much clearer and more textured. The overall presentation still sounded rich, but was now more natural and above all correct.

In 2007 we did a shootout for this album and noted the following:

For those with better tube gear, the string tone on this record is sublime, with that rosin-on-the-bow quality that tubes seem to bring out in a way virtually nothing else can, at least in my experience.

Our experience since 2007 has changed our view concerning the magical power of tubes relative to transistors to bring out the rosiny texture of bowed stringed instruments. We have in fact changed our minds completely with respect to that common belief.

Our transistor equipment — and by ours we mean the mysterious low-powered ’70s integrated amp we use, mated with the EAR 324P phono, making no claims whatsoever for any other transistor equipment of any kind — is dramatically faster, more transparent, dynamic and resolving than any tube equipment we have ever heard. It is, simply put, much more TRUTHFUL. It is precisely this quality that is hardest to find in all of audio. It is also the one quality of our system that, more than any other, allows us to do our job accurately and efficiently.

Our transistor equipment lets us hear the sound of the record being played, uncolored and unadorned. It also has the added benefit of sounding to us more like live music. (More on that coming down the road.)

Yes, we know, we haven’t heard every piece of tube gear in the world. There may indeed be something out there with even more of the qualities we recognize in live music than we are currently capable of reproducing with our transistor equipment. We remain open-minded as always, but skeptical — a combination that has certainly served us well over the 29 years we have been in business selling records and equipment.

What We’re Listening For on The Four Seasons

What do we love about LIVING STEREO pressings? The timbre of every instrument is Hi-Fi in the best sense of the word. The instruments on this vintage recording are reproduced with remarkable fidelity.

Now that’s what we at Better Records mean by “Hi-Fi,” not the kind of Audiophile Phony BS Sound that passes for Hi-Fidelity these days. There’s no boosted top, there’s no bloated bottom, there’s no sucked-out midrange. There’s no added digital reverb (Patricia Barber, Diana Krall, et al.). The microphones are not fifty feet away from the musicians (Water Lily) nor are they inches away (Three Blind Mice).

Wikipedia On The Four Seasons