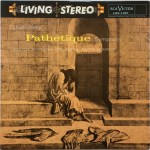 Hot Stamper Pressings of the Music of Tchaikovsky

Reviews and Commentaries for the Music of Tchaikovsky

It’s been quite a while since I played the Classic pressing, twenty years or more, but I remember it as none-too-impressive, playing into my natural prejudice against the earliest Living Stereo recordings and Classic Records themselves.

Keep in mind the Shaded Dog originals of this recording are awful too, as we make clear below.

We’ve played at least three Shaded Dogs of LSC 1901 since 2011 and all three were AWFUL.

A recent reissue showed us the light.

This copy is cut clean, its dynamics intact, which just goes to show how much better the master tape must be than we’ve been led to believe by the original Shady Dogs and the hacks at Classic Records (note: their heavy vinyl reissue is awful).

RCA managed to cut this record amazingly well decades after the tape was first recorded, not for audiophiles, but for music lovers. Maybe that’s the secret.