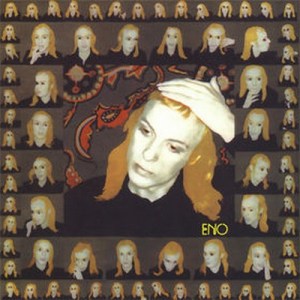 TWO SUPERB SIDES on this Killer White Hot Stamper pressing of Brian Eno’s MASTERPIECE — one of my All Time Favorite Albums, a real Demo Disc of twisted pop. This British Sunray original pressing takes the sound to a level BEYOND all others. This copy has deep, punchy bass that exceeded my wildest expectations, energy like I couldn’t believe, and a wonderful smoothness that you just don’t get on most copies.

If you have a big speaker and the kind of high quality playback that is capable of unraveling the most complicated musical creations, with all the weight and power of live music, this is the record that will make all your audio effort and expense worthwhile. That’s the kind of stereo I’ve been working on for thirty years and this album just plain KILLS over here.

That being said, it may not be the kind of thing most music loving audiophiles will be able to make much sense of if they have no history with this kind of Art Rock from the ’70s. I grew up on Roxy Music, 10cc, Eno, The Talking Heads, Ambrosia, Supertramp, Yes and the like, bands that wanted to play rock music but felt shackled by the chains of the conventional pop song. This was and still is my favorite kind of music.

When it comes to the genre, I put this album right at the top of the heap along with several other landmark albums from the period: More Songs About Buildings and Food, Roxy Music’s first, Sheet Music, Crime of the Century, Ambrosia’s first two releases, The Yes Album, Fragile and perhaps a handful of others, no more than that.

Like Roxy Music’s first album, this is a powerhouse that not only rewards repeated listenings but requires them. Music like this simply cannot be digested at one sitting. Like the Beatles said, It’s All Too Much. But the more you hear it the more you will be able to understand it and appreciate it and, if you’re like me, really start to love it (I hope). I’ve been listening to this album since the mid-’70s and have never tired of it. To me it’s the very definition of a Desert Island Disc: a record that knocks me out every time I play it and never wears out its welcome. It’s still fresh and “cutting edge” (if I can use that term) thirty odd years after its release.

This album is all about sound, pure sound itself if you will: the sound of the instruments, their textures, and the textures of the soundscape Eno has created for them. Much of that information is lost or perverted on the LP reissues and of course the CD. Only these British originals sound like they are made from fresh master tapes on rich, sweet tubey-magical, super high resolution cutting equipment.

With the subtle harmonics of Eno’s treated sounds captured onto vinyl intact, the magic of the experience far exceeds just another batch of catchy songs with clever arrangements. It truly becomes an immersive experience; sounds you’ve never heard in quite that way draw you into their world, each more interesting than the next.