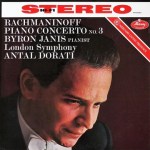 A Hall of Shame Pressing and another Speakers Corner Classical LP debunked.

A blog entry on the site from 2005 about the new Mercury reissue series that was coming out noted that:

I am expecting the new Rach 3rd (90283) later this week, and will report my findings as soon as I have a had a chance to evaluate it.

THE MOST OPAQUE, DULL AND LIFELESS 180 GRAM REISSUE IN THE HISTORY OF THE WORLD!

My blog entry from 2005 continues below, transcribed practically word for word.

(You may notice that not much has changed in the world of records since I wrote this screed all those years ago.)

I hope it’s becoming clear to people now that this series is an enormous fraud perpetrated against all right thinking (right listening?) audiophiles. I can’t imagine a worse sounding record. It makes the most opaque ’70s Phillips or London LP sound positively transparent next to this thick piece of crap. I pulled out my late label copy, far from the best sounding pressing I’ve ever heard, and it killed the new version. The trumpets sound like they’re playing from under a pile of blankets on this 180 gram LP. The sound is so bad it defies understanding.

And the sad thing, in some ways the saddest aspect of this very sad affair, is that I can safely predict right now, with absolutely no fear of being proved wrong, that EVERY MAJOR RECORD DEALER WILL RAVE ABOUT IT. Mark my words. Every one. Except me of course. But I’m not one of the majors. Thank god I don’t have to sell crap like this to make a living.

Any record dealer who would stoop low enough to take money for a record this bad is telling you something very important about his business: he either can’t tell a good record from a bad one, or he doesn’t care. Either one would make me take my business elsewhere. How do these guys stay in business? (Maybe the fact that most of their catalogs are now given over to equipment explains it.)

And you should be outraged at this kind of fraud. If you give money to retailers who so obviously have nothing but contempt for you, you share in the blame. You’re keeping these guys in business. It makes me think of the scene in Network where Howard the veteran newscaster talks directly to his audience:

After playing this new Mercury I was filled with questions. What is to become of the record business? Do we really need records that sound worse than the worse sounding CDs at twice the price? Can these people really be selling this crap? Can audiophiles really be fooled by it? Is it that easy? How is it even possible? When a record is this bad doesn’t everybody hear it? And if not, why not?

Hey folks, I’m just trying to find you some Better Records. That’s how I see my job. The current crop of companies producing new records — with a few exceptions like Cisco, S&P, even the new MoFi — are not making my job very easy, I can tell you that.

I don’t know what these other guys selling this crap are trying to do. It sure doesn’t have much to do with better records.

So back to the Mercuries.

Speakers Corner has a pretty spotty track record when it comes to making records. Some of their stuff is just junk. (Steely Dan, The Planets, We Get Requests — I could name fifty bad to truly awful sounding records they’ve made over the years.) We actually created a section for some of them, but there are so many I couldn’t find the time to list them all.

You’ll notice that we only carry a small fraction of the 100+ classical titles Speakers Corner has done, about fifteen at last count. They do better with Jazz; there we sell about twenty five of the better titles. Overall score? I would say one out of four is about right. Not bad. Not good, but not bad.

But better than the originals? That’s a preposterous claim that’s hardly worth responding to. But I had a few things on my chest I wanted to get off, hence today’s screed.

So why do we carry them? Well, some of them may be decent. I may not ever know though. They are so damn expensive due to the current exchange rates that I may not review them at all, as there is simply no profit in these records anymore.

Buyer beware obtains, but at least I’m honest about it, unlike some audiophile record dealers who want to hype these Mercuries as the Second Coming of Golden Age Vinyl. That, they definitely are not. (The First Coming was good enough for me, as you know. I am firmly on record as saying that the RCA, Decca, Mercury, London, etc. originals are the best sounding records ever made, bar none, and nothing I’ve heard has provided a shred of evidence to the contrary.)

Reports from ears I trust are not good, but that’s just on the Ravel disc. The originals are a fortune, the CDs don’t cut it, so what’s a mother to do?

For one thing, Speakers Corner needs to focus on doing better titles. Much of Mercury’s 20th Century music has a limited appeal. (Fetler? Berg? Schuller? Enough already.) The Byron Janis record coming soon, however, is a breath of fresh air. That’s a great Mercury. The piano tone on that recording is as solid as a rock. Hope they do a good job with it. Only one way to tell though, right?

Please forgive me for falling down on the job with this series. Most of you who buy records from us on a regular basis do so because we know a good record from a bad one and aren’t afraid to say it.

But… what we do, and the way we do it, is already so time consuming and, don’t laugh, unprofitable (per hour anyway, as I sit here on a beautiful Sunday afternoon), that to devote the time and resources to this series at this point just strikes me as foolish.

The last few months have seen a huge number of New LP Arrivals to the site, 691 so far in 2004 by today’s count, and this, as I’m sure you can imagine, takes an ungodly amount of time and effort.

Many of these are records I’ve owned for more than ten years, waiting for the right time and right way to make them available to those of you who appreciate these kinds of very special recordings.

Well, now is that time. The Mercuries will have to wait.