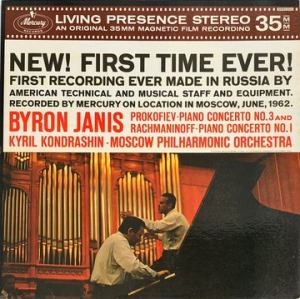 Please note: we award the Four Plus grade so rarely that we don’t have a graphic for it in our system to use in the grading scale shown above. We rarely find records with this kind of sound, just a few times a year at most — this is the only one on the site at this time.

Side one shows up on the chart as A+++, but when you hear this copy you will know why we gave it that fourth plus!

This is an exceptionally quiet early Mercury Plum label stereo pressing of two of Byron Janis’s most famous performances (along with the Rachmaninoff 3rd, which is every bit as good). It’s a longtime member of the TAS Super Disc list.

The recording is explosively dynamic and on this copy, the sound was positively jumping out of the speakers. In addition, the brass and strings are full-bodied and rich, with practically no stridency, an unusual feat the Mercury engineers seem to have accomplished while in Russia.

Big, rich sound can sometimes present problems for piano recordings. You want to hear the percussive qualities of the instrument, but few copies pull off that trick without sounding thin. This one showed us a piano that was both clear and full-bodied.

With huge amounts of hall space, weight and energy, this is DEMO DISC QUALITY SOUND by any standard. Once the needle has dropped you will quickly forget about the sound and simply find yourself in the presence of some of the greatest musicians of their generation captured on some of the greatest analog recordings of all time.

So big and clear. Zero smear. Zero distortion. Huge and open and hi-rez like no other!

The piano is huge and powerful, yet the percussive and lighter qualities on the instrument are clearly heard in proper relation to the orchestra as a whole.

What We’re Listening For on Both Piano Concertos

If you’re in the market for quality classical recordings these days you know that finding quiet, tonally correct Mercury pressings is no easy task. So many are noisy or groove damaged, especially on this title. If the record has been played too many times on the typical turntable of the day, the piano will break up like crazy whenever Janis starts to pound away, which is something both works call for throughout. Regrettably, we’ve had to trade in more than our share of great sounding, groove-damaged Golden Age recordings over the years.

This is, in my opinion, the best version of the Prokofiev’s third piano concerto available, and that alone is a good reason to purchase this disc.

Both the Rachmaninoff and Prokofiev concertos were recorded in Bolshoi Hall of the Tchaikovsky Conservatory in Moscow on June of 1962. The recording was made 3-4 weeks after the historical concert on May 13, 1962, in which, after being invited by the soviet government, Janis agreed to play with the Moscow Philharmonic under the great Kyril Kondrashin in a special concert in which he would play three “different” piano concertos back to back.

That night, Byron Janis played the Rachmaninoff’s first piano concerto, the Schumann concerto and closed with a spectacular account of Prokofiev’s third. The story is that the audience went absolutely crazy and clapped, shouted and praised Janis for over 20 minutes without stopping. After such a response, Janis and Kondrashin decided to play as an encore the third movement of Tchaikovsky’s first piano concerto. That night was an unforgettable musical event.

Madame Lina Prokofiev, Prokofiev’s widow, who was present in the concert hall that night, was moved to tears after listening to Janis play her late husband’s third piano concerto and stated that she was deeply moved by the inspired interpretation.

The Rachmaninoff first is in the same league, with excellent piano playing and phenomenal orchestral support. Altogether this is a fantastic disc and no music collector should be without it.