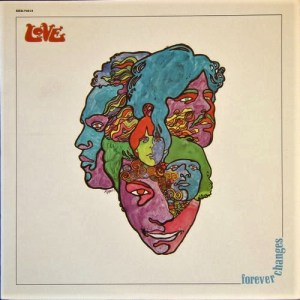 Two incredible sides! We had a chance to shootout a handful of copies recently and didn’t hear any other copies that could compete with this Elektra Gold Label Original Pressing. We are HUGE fans of Love and this copy will show you why. Both sides are lively and full-bodied and the bottom end is KILLER throughout. In short, it’s EXACTLY the sound you want for this music. Give it a chance and you’ll hear for yourself!

Compared to some other copies, this one had more impact, more power and more energy. The vocals are full-bodied and rich with excellent presence. Most copies we heard were pretty blurry down low, but you can actually make sense of the bass on this one.

What We’re Listening For on Forever Changes

Love’s Forever Changes made only a minor dent on the charts when it was first released in 1967, but years later it became recognized as one of the finest and most haunting albums to come out of the Summer of Love, which doubtless has as much to do with the disc’s themes and tone as the music, beautiful as it is…

Forever Changes is inarguably Love’s masterpiece and an album of enduring beauty, but it’s also one of the few major works of its era that saw the dark clouds looming on the cultural horizon, and the result was music that was as prescient as it was compelling.