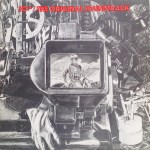 This review was written circa 2005.

This Universal Super De Luxe import LP appears to be the regular vinyl version that, for all we know, might actually still be in print in Europe. It appears to have been specially pressed on heavy import vinyl for our domestic market as part of the new Universal Heavy Vinyl series.

Either that or it’s being made from the old metalwork for the LP that would have been available most recently in Europe (out of print by now I should think).

Which is a very long-winded way of saying that it is not in any real sense remastered, if such a claim is being made for it or the series. Rather it has simply been repressed on Heavy Vinyl in Europe and imported to the states.

None of which is either here nor there because the record is an absolute DISASTER.

The top end is so boosted, after the cutter-head-emphasis gets done with it all that’s left is pure DISTORTION. No one with two working ears and even a halfway-decent stereo can fail to notice how awful this pressing sounds. How a record this poorly mastered (or pressed, perhaps it’s a manufacturing defect) could get through the Quality Control department at Universal is beyond me.

Wait a minute.  Who say they even have a quality control department?

They, like every other company that produces records these days, could apparently care less whether the records they make are any good or not. There is not an iota of evidence to support the contention that anyone at any of these companies knows what the hell he is doing.

Oh, but it’s ANALOG. Folks, take it from me: because it’s on vinyl, heavy or otherwise, doesn’t have a whole lot to do with whether it sounds any good or not. The Hoffman-mastered DCC Gold CD is a million times more analog sounding than this piece of crap. Unlike this LP, the tonality of his CD is right on the money. It’s still a CD, and the Hot Stamper pressings we sell will trounce it sonically, but it’s worlds better than this Analog Vinyl.

If any record ever deserved a failing grade, it’s this one. After a few minutes you simply will not be able to be in the same room with it.

This link will take you to some other exceptionally bad records that, like this one, were marketed to audiophiles for their putatively superior sound. On today’s modern systems, it should be obvious that they have nothing of the kind and that, in fact, the opposite is true.